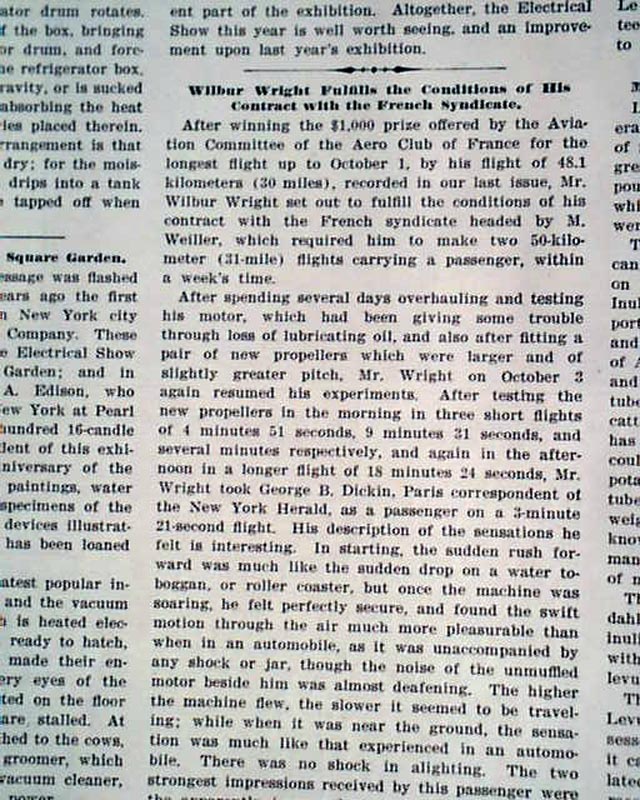 
SCIENTIFIC AMERICAN, New York, Oct. 17, 1908  The prime feature would be the page 6 the headline: "Wilbur Wright Fulfills the Conditions of His Contract with the French Syndicate" with "At dusk the same evening (October 3) Mr. Wright with Franz Reichel of the Figaro as passenger, made a record flight of 55 minuets 37 seconds, during which he traversed a distance of fully 58 kilometers (36 miles). It was shortly before 7 P.M., and dark save for the moonlight, when the flight terminated." Additionally, there is converge of Wilbur's flight with Mrs. Edith Berg who was the first woman to ever fly with him: "On October 7, after first making a 3-minute 24-second flight with Mrs. Hart O. Berg he took Mrs. Berg of a short flight of 2 minutes and 3 seconds duration. Mrs. Berg was the first t woman to fly in a Wright aeroplane, and so delighted was she with the experience that she induced Mme. Bolle to make a flight the next day."
Eighteen pages, nice condition.