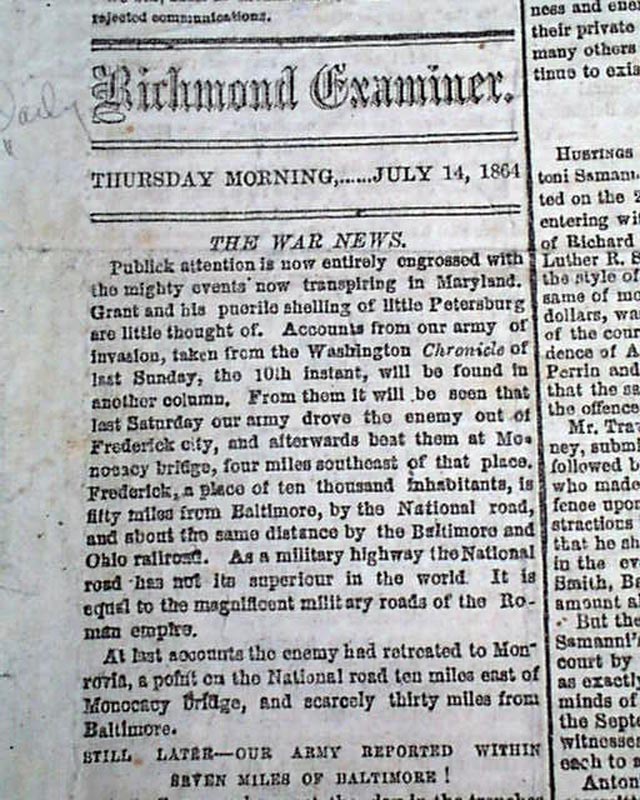 Various Civil War news with a Confederate bias, making for interesting reading as such. Among the front page items are: "The War News" with subheads: "Still Later--Our Army Reported Within Seven Miles of Baltimore!" "From Petersburg" "The Enemy Mining at Petersburg" "Burnside--Where Is He?" "A Cavalry Victory in Prince George". Also: "A Crying Evil" and a few other smaller items.
Among the "Courts" items on the front page are three cases involving slaves, in two cases they were found guilty and were sentenced to 39 lashes, in the other case the slaves were found not guilty.
The Civil War news continues on the back page including editorial talk on the Civil War, plus: "A Word To The Cavalry" "Later From the United States" "A Case of Cruel Injustice" "and other smaller items. Among the ads are two for runaway slaves.
A single sheet newspaper as was typical from the Confederacy late in the war, as most of the paper mills were located in the North. Various creasing and wrinkling with some dirtiness & rubbing to the bottom quadrant, irregular at the margins.