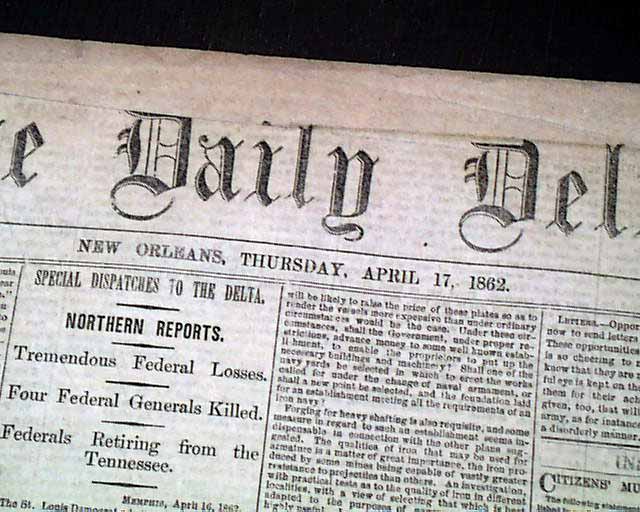 Truly Confederate newspapers from New Orleans are very difficult to find, as Admiral Farragut entered the mouth of the Mississippi in mid-April, 1862 and finally took New Orleans on April 28. Shortly thereafter Benjamin Butler moved in and took control of the city, it surrendering without a fight.
So "Confederate" issues from New Orleans are limited to those published between Louisiana's secession from the Union on January 26, 1861 and the end of April, 1862, just a brief 15 month period.
Notable content on the front page includes stacked one column heads: "Special Dispatches The Delta" Northern Reports" "Tremendous Federal Losses" "Four Federal Generals Killed" "Federals Retiring from Tennessee". Also under "Federal Naval Preparations" is a lengthy communication from the Sec. of Navy to Congress, signed in type: Gideon Welles.
Page 2 has an editorial: "Concentrate Our Resources", plus a lengthy report headed: "The Battle of the 6th of April". Also has bits of war news under "Telegraphed To The Delta".
Four pages, a bit irregular at the spine margin due to disbinding affecting just a few words, otherwise good condition.