Home > Back to Search Results > Engraving of the new Confederate flag...
Click image to enlarge 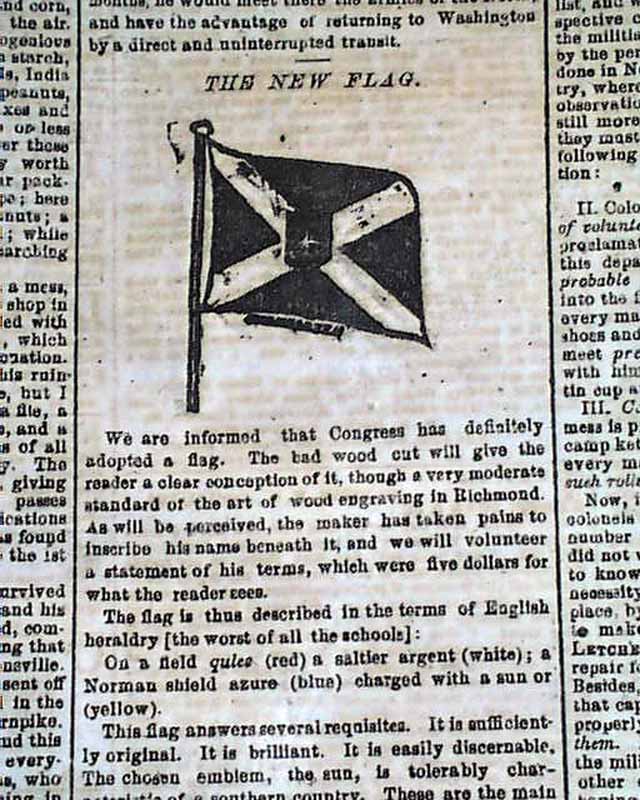 Engraving of the new Confederate flag...

The striking feature of this issue is the quite rare, page two print of: "The New Flag" with the text beginning: "We are informed that Congress has definitely adopted a flag. The bad wood cut will give the reader a clear conception of it, though a very moderate standard of the art of wood engraving in Richmond..." and then goes on to describe the flag.
Engravings within Confederate newspapers are extremely rare, and this is a great one to find in a newspaper from the Confederate capital.
The editorial begins: "A period of agonizing suspense has arrived. In a week we shall know more than all the prophets & all the philosophers can tell. In a week we shall whip or be whipped. The Yankees are in the very act of executing their grand concerted movement. The mortar fleet is at work on New Orleans; the attack on Fort Macon is commenced; and whether Savannah is still safe or not no one but the members of the government can certainly say..." with more.
Page two also has: "The Enemy Attacking New Orleans" "The Enemy's Occupation of Fredericksburg" and more. And the war coverage carries over to page 3.
Four pages, never bound nor trimmed, printing crease on the front page affects some ads only, great condition.