Home > Back to Search Results > Deaths of Thurgood Marshall and Thomas Dorsey...
Click image to enlarge 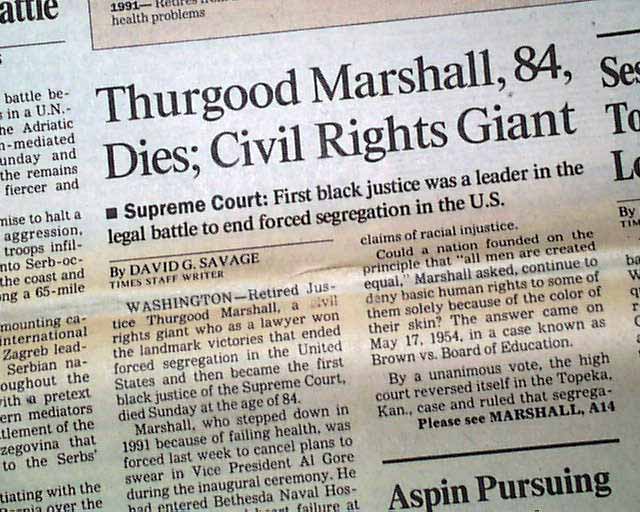 The front page carries the two column wide, two line announcement "Thurgood Marshall, 84, First Black Justice, Dies" with subhead "Supreme Court: Retired jurist was a leader in the legal battle to end forced segregation in the U.S.". "Retired Justice Thurgood Marshall, a civil rights giant who as a lawyer won the landmark victories that ended forced segregation in the United States and then became the first black justice of the Supreme Court, died Sunday at the age of 84..." The article continues inside with additional photos. This also enclosed a boxed insert which includes two photos, one as the Supreme Court justice and the other from 1957 when he was an NAACP lawyer involved with the Little Rock Nine. Also included is a list of milestones in his career. A nice editorial is also within the issue.
Under the Obituaries is "Thomas A. Dorsey, 93; Pianist Created Gospel Music" which includes a very nice photo of Dorsey sitting at the piano. "Thomas A Dorsey, the bawdy-house pianist who melded brash blues and sensitive spirituals into an often complex rhythmic mix he christend 'gospel,' has died..."
Other news, sports, articles and advertisements are within.
Complete in 80 pages and in very nice condition.