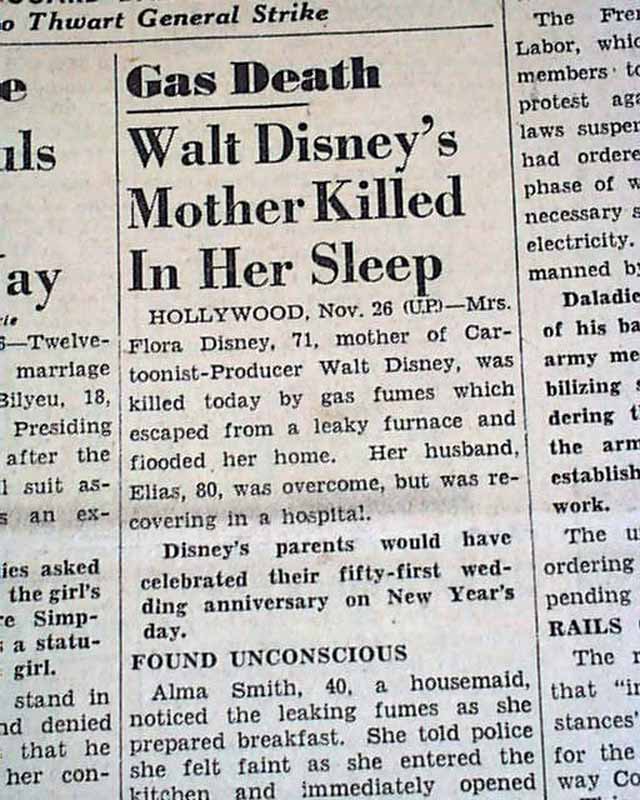 The front page has a one column heading: "Walt Disney's Mother Killed In Her Sleep" with caption: "Gas Death" See below for details. Many believe that most of Walt Disney's animated films had motherless characters due to this accidental death.
Complete with all 40+ pages, light toning and minor wear at the margins, small library stamp within the masthead, small binding holes along the spine, generally nice.

wikipedia notes: Flora Call Disney died in 1938 in an accident that plagued her son Walt Disney with grief for the rest of his life. After the success of their film Snow White and the Seven Dwarfs, in 1938, Walt Disney and Roy Disney presented their parents with a new home in North Hollywood, near the Disney studios in Burbank, California. Less than a month after moving in, Disney complained to her younger sons of problems with the gas furnace in her new home. Studio repairmen were sent to the house, but the problem was not adequately fixed. Disney wrote a letter to her daughter Ruth Disney describing the wonderful new home, but again complaining of the fumes from the furnace. A few days later, Disney died of asphyxiation caused by the fumes at age 70.