Home > Back to Search Results > One of the best headlines on the "Black Sox" scandal to be had...
Click image to enlarge 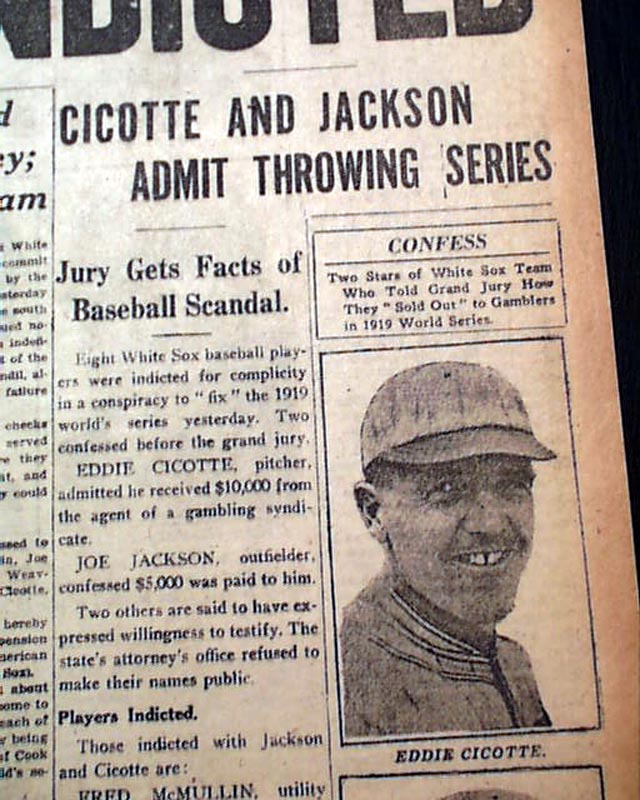 One of the best headlines on the "Black Sox" scandal to be had...

Among the most desired reports in all of baseball history are those covering the infamous "Black Sox" World Series scandal of 1919, in which players of the Chicago White Sox were accused of gambling on the games.
And when it comes to reports on this Series, it would be difficult to find a better newspaper for such content. This headline would be difficult to beat as well.
The banner headline announces: "2 SOX CONFESS; 8 INDICTED" with a subhead: "Cicotte And Jackson Admit Throwing Series" "Jury Gets Facts of Baseball Scandal". The front page also features photos of the two, captained: "Eddie Cicotte" and "Joe Jackson".
The report begins: "Eight White Sox baseball players were indicted for complicity in a conspiracy to 'fix' the 1919 world's series yesterday. Two confessed before the grand jury..." with much more. Included as well are the names of the "Players Indicted".
The report carries over to page 2 where, in additional to much more text on the investigation, are photo of the other six indicted, headed: "FOUL BALL: ALL OUT". Page two has a related article as well: "Comiskey Says Exposures Will Clean Baseball".
Complete in 24 pages, address stamp above the masthead, disbinding slits at the blank spine, light toning at the margins, generally nice.