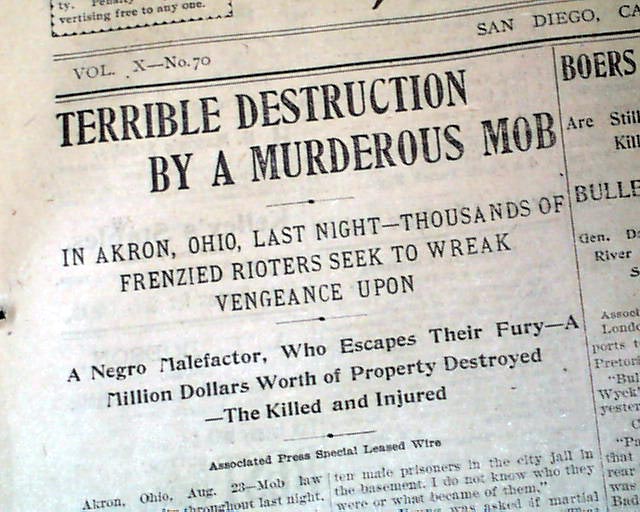 The top of the front page has a two column headline: "TERRIBLE DESTRUCTION BY A MURDEROUS MOB" with subheads. (see) Surprisingly this issue is in good condition being from the "wood pulp" era. Very hard to find issues that are not totally fragile from this era in paper.
Complete with 8 pages, 19 x 14 1/2 inches, small library stamps within the masthead, a few small binding holes, generally very nice.

wikipedia notes: On August 22, 1900, Akron experienced its worst riot in history, and possibly the worst riot in Ohio history. This followed the abduction and sexual assault on the six-year-old daughter of the Maas family while in front of her home. Around midnight that day, Louis Peck, an African-American who had been working as a bartender on Howard Street in Akron, was arrested at a train station in Cleveland but then brought back to Akron where he confessed to the crime. The next day's newspapers exaggerated Peck's confession and even printed the confession in red ink. A mob gathered in front of the newly built City Building and threatened a lynching. The Police Chief arranged for Peck and another black man to be moved to Cleveland for their safety. In the evening crowds grew even larger, demanding Peck and attempting to enter the City Building, but were barred by police. Tensions escalated after police returned fire into the crowd after shots were fired toward them, and two small children were killed in the crossfire. The mob resorted to dynamite, blowing up the City Building and also the Courthouse in attempts to reach Peck. Rioters even attacked firemen who attempted to put the fire out, by throwing bricks and cutting their hoses. The rioters burned the downtown fire station to the ground. At some point during the riot, the mayor called to the crowd from the window of a building that Peck had been taken from Akron to Cleveland, but the crowd refused to believe this. The mob violence lasted nearly to 4:00 the next morning, when the Governor declared martial law and sent soldiers to restore order. Thirty-one men and boys were later convicted of charges related to the riot. Louis Peck was convicted in less than 20 minutes; there was no lawyer who would take his case. In 1913 he was freed by Governor Cox for wrongful imprisonment. 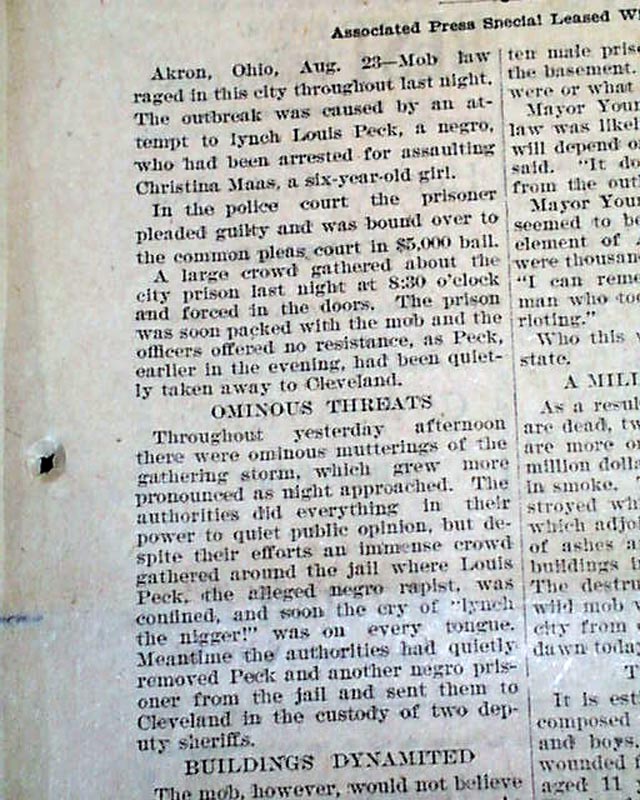 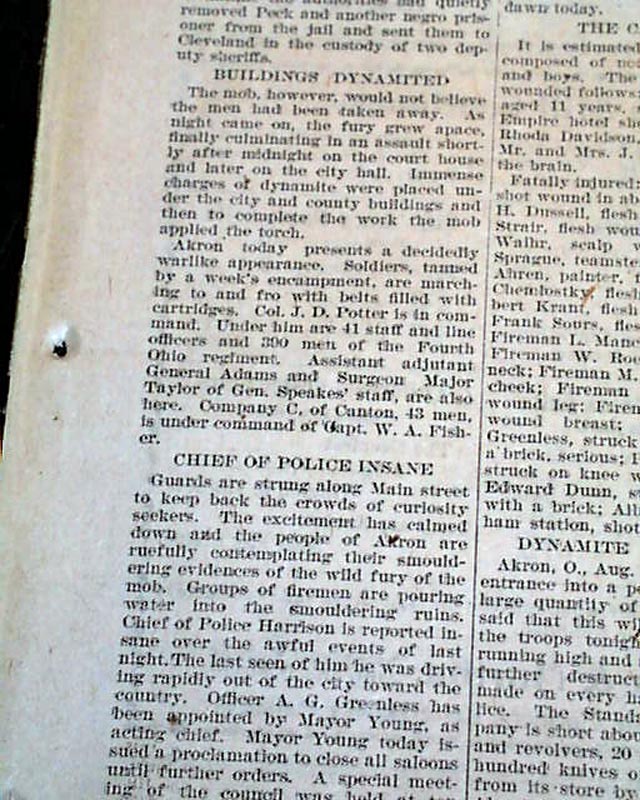 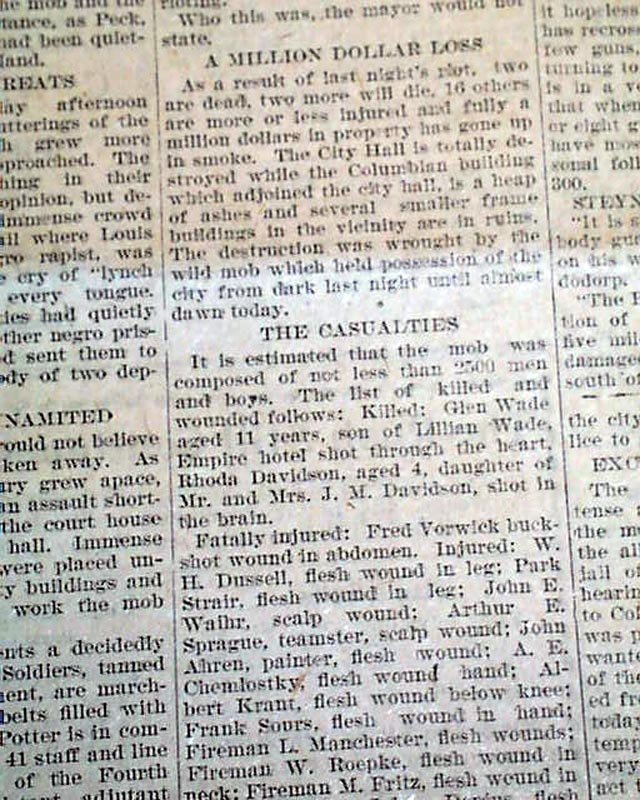 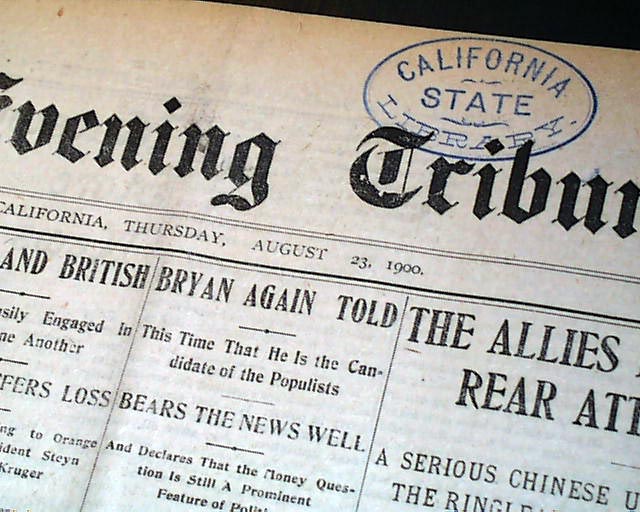 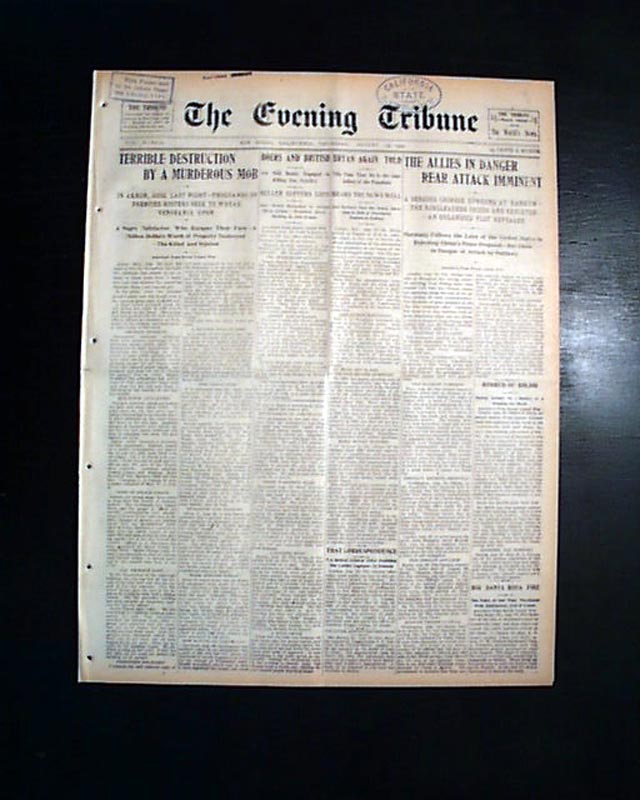