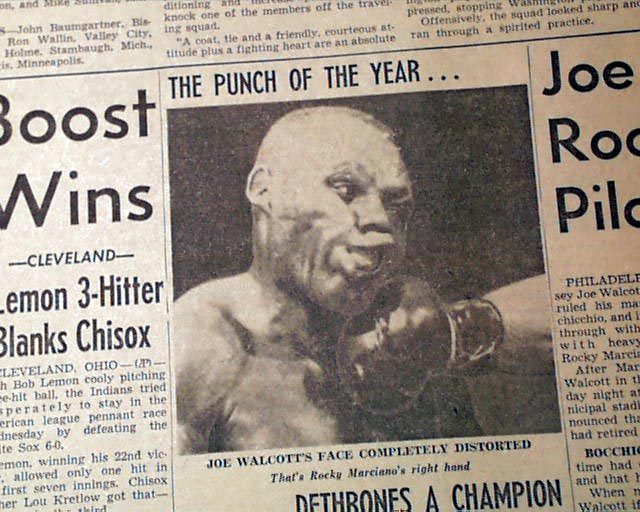 The front page of the sport's section has two related photos with headings: "The Punch Of The Year" and "Dethrones A Champions" Also a two column heading: "Joe to Fight Rocky Again; Pilot Agrees" (see)
Complete with 38 pages, light toning and a little wear at the margins, generally nice.

wikipedia notes: Marciano, 29, faced the World Heavyweight Champion, 38-year-old Jersey Joe Walcott, in Philadelphia on September 23, 1952. Walcott dropped Marciano in the first round and steadily built a points lead. In the 13th, Walcott used his trademark feint to set up his right hand, but Marciano's "Suzie Q" landed first, a powerful right hook causing Walcott to slump to his knees with his arm draped over the ropes. He lay motionless long after he had been counted out and Marciano became the new World Heavyweight Champion. At the time of the stoppage, Walcott was leading on all scorecards, 8–4, 7–5, and 7–4.