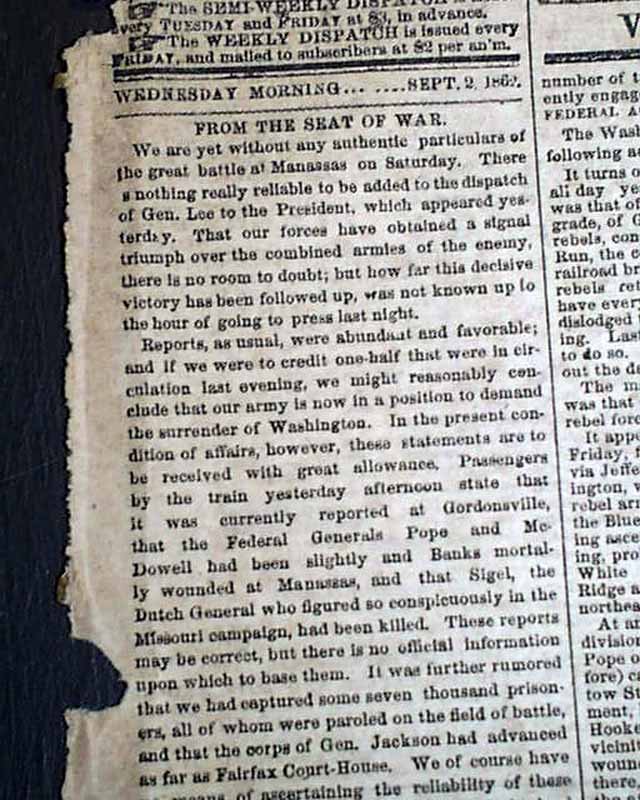 A nice newspaper from the capital of the Confederate States of America. Among the front page items are: "From the Seat of War" which includes: "We are yet without any authentic particulars of the great battle at Manassas on Saturday...Reports, as usual, were abundant & favorable...As Stated we have no doubt of the triumph of our arms nor have we any doubt that our triumph has been signal and glorious...".
Also on the ftpg: "Evacuation of Fredericksburg" "From Norfolk" "Latest From the North" which has over 3 columns with tremendous detail the historic Second Battle of Manassas, with some subheads including: "federal Account of Wednesday's Fighting" "Further Particulars" "Pope's Official Report" which is datelined Manassas Junction and signed by him in type: John Pope; "Newspaper Dispatches" "The Battles in Northern Virginia--Interesting Accounts from Northern Papers--Conflicting Statements" "Federal Account of Gen. Stuart's Dash on Manassas".
Also on the ftpg. are reports from the: "Confederate States Congress" which includes an address to Congress signed in type by: Jefferson Davis, and also a letter ""To President Davis" datelined at Manassas Junction & signed in type: R. E. Lee. In it he reports: "So far this army has steadily advanced & repulsed the frequent attacks of the enemy...". This is followed by another letter to Davis which begins: "The army achieved to-day, on the plains of Manassas, a signal victory over the combined forces of Gens. McClellan and Pope..." with more, signed: R. E. Lee.
The back page has a column of war-related content, including a nice editorial headed: "Now is the Time" which begins: "Fortune has again crowned our arms with signal success. The shattered columns of McClellan and Pope are flying before our victorious legions...". Also a short article headed: "General Lee".
The rest of the bkpg. is taken up with various ads and notices, including "Military Notices" and "Substitute Notices".
Complete as a single sheet newspaper with a full masthead, slightly irregular at the blank spine margin, very nice condition.
Great to have in a newspaper from the Confederate capital such a very nice report--on the front page--of the significant Second Battle of Manassas, or Bull Run. 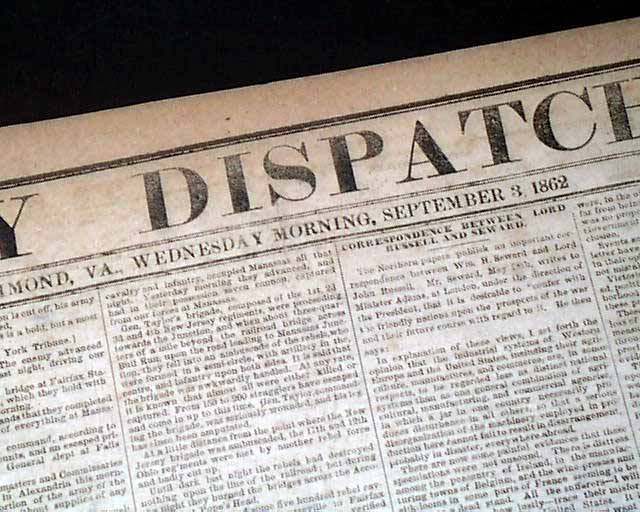 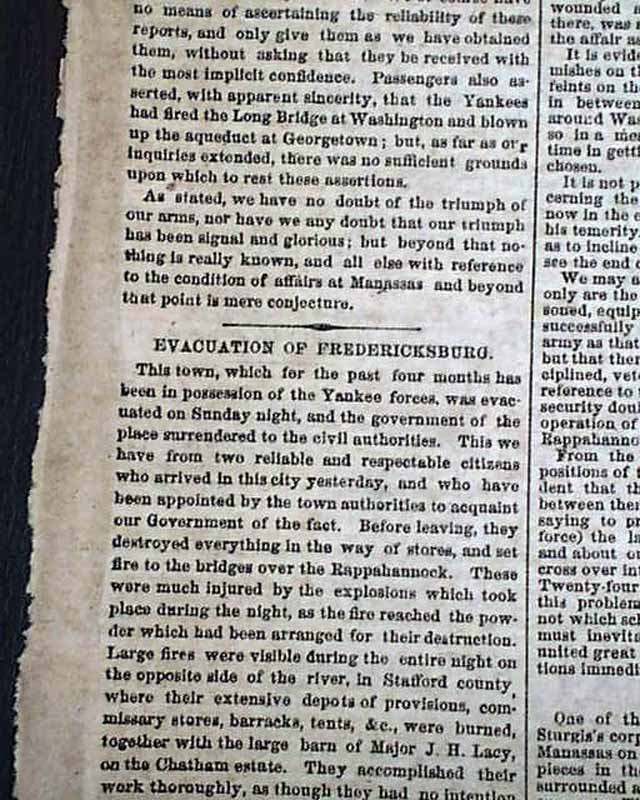 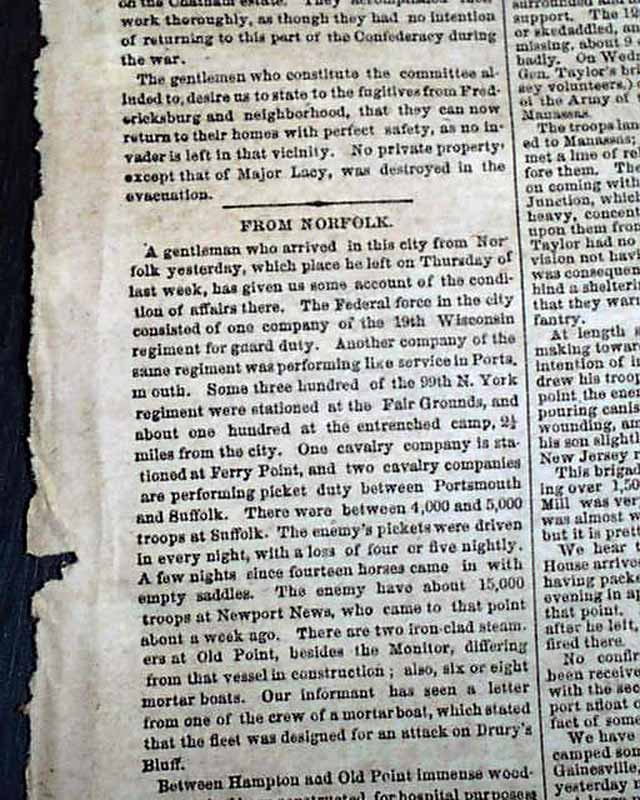 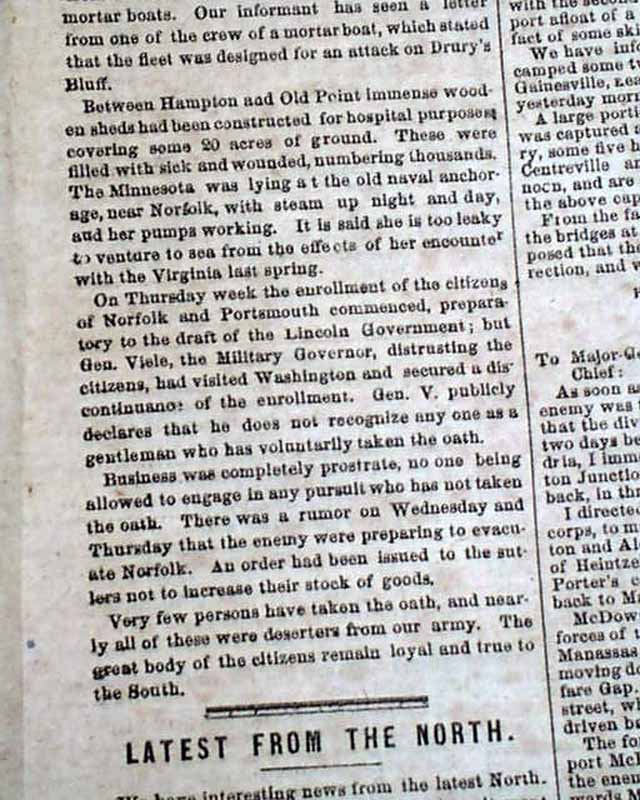 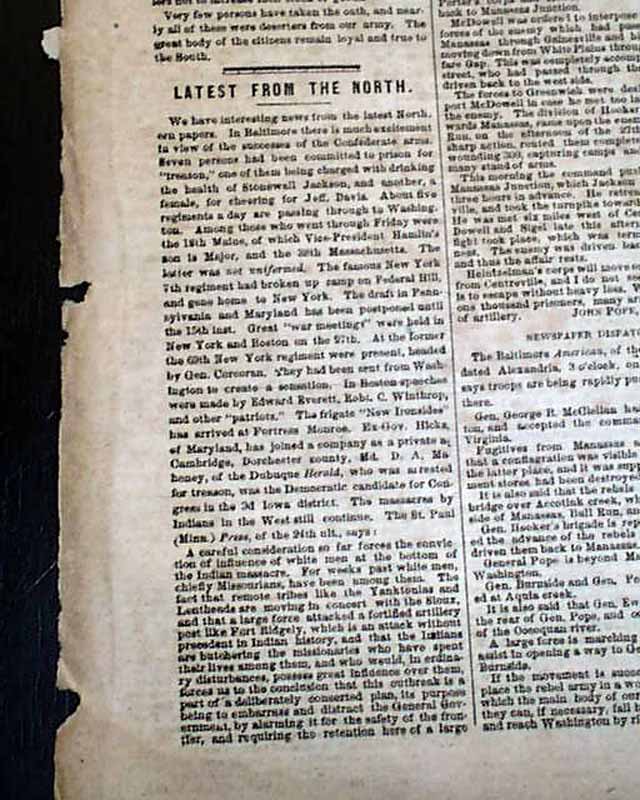 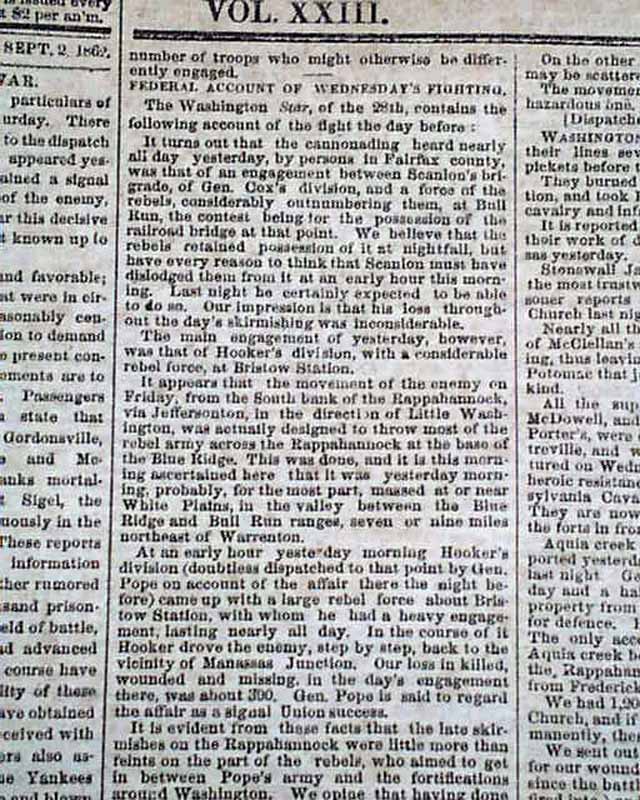 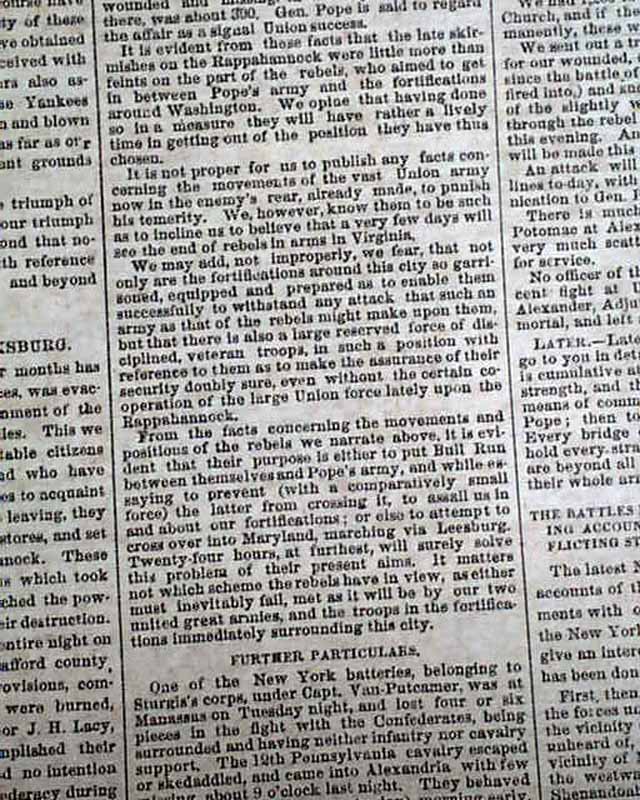 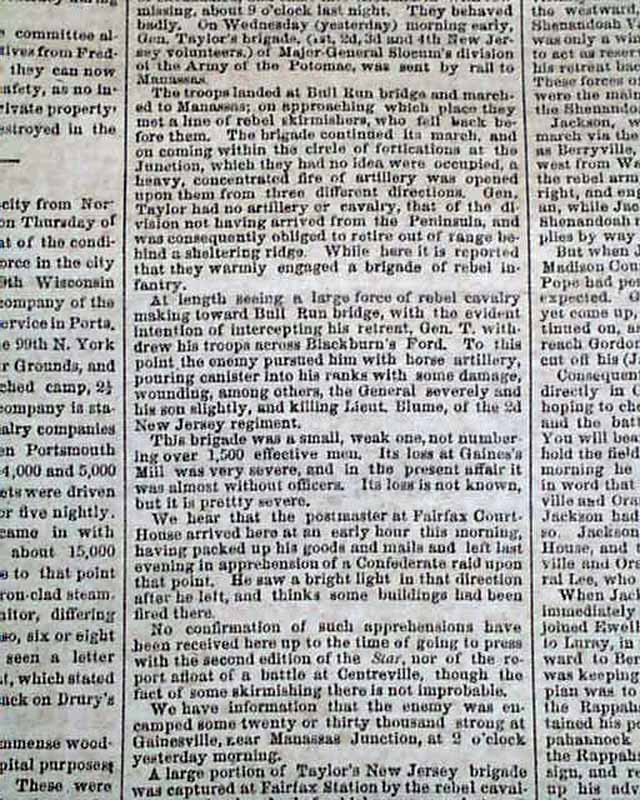 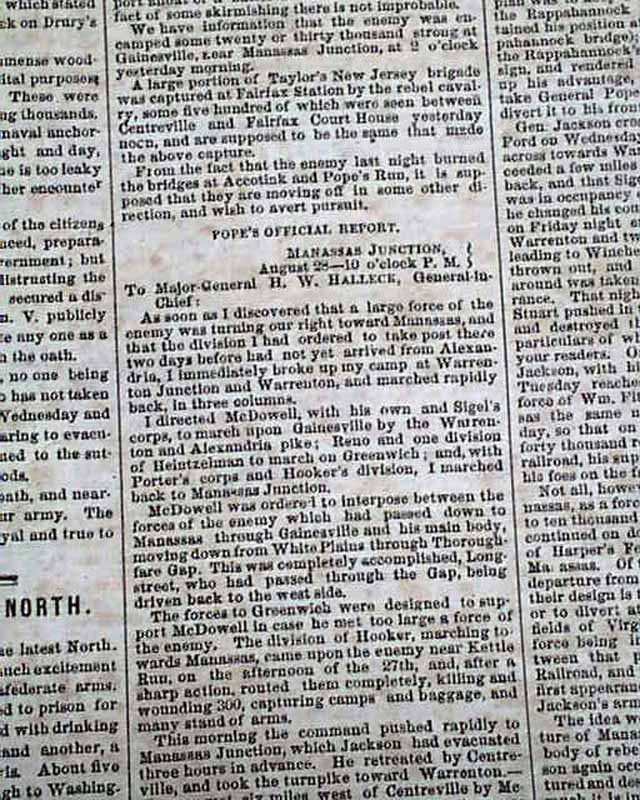 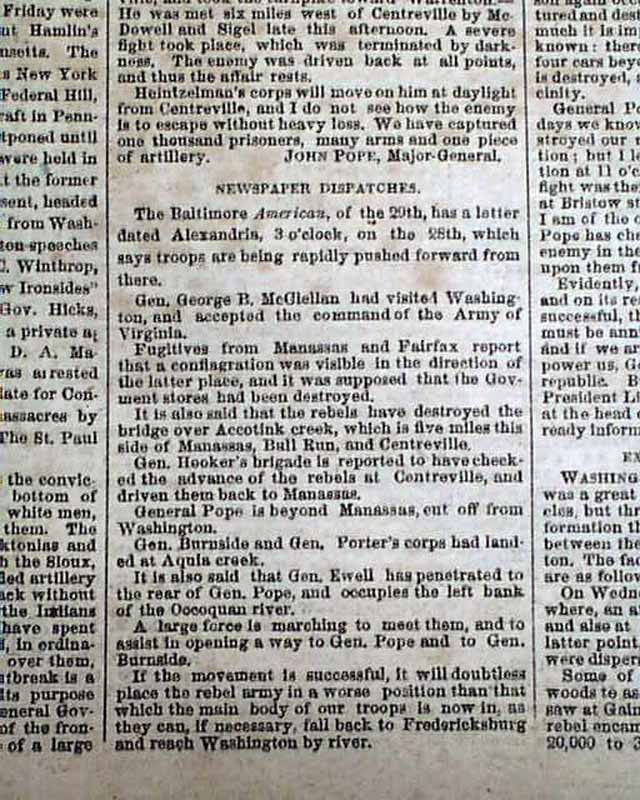 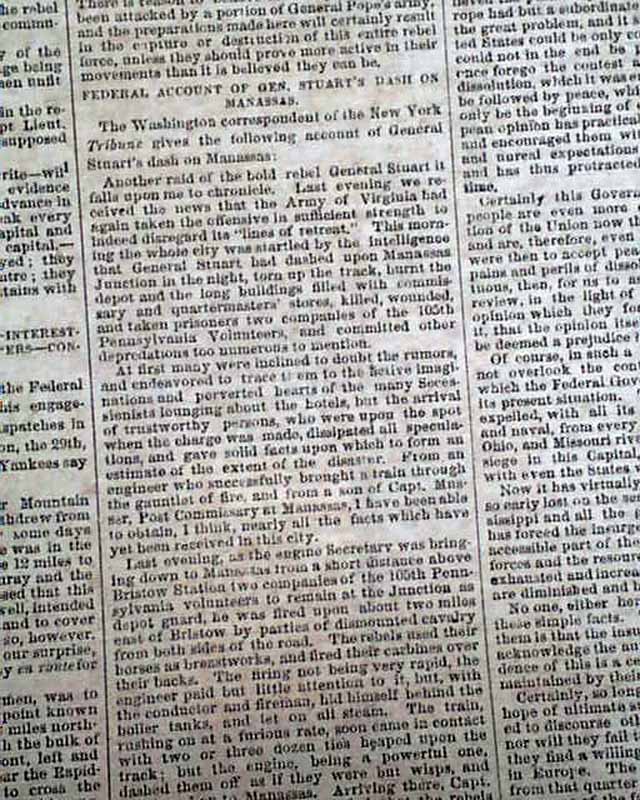 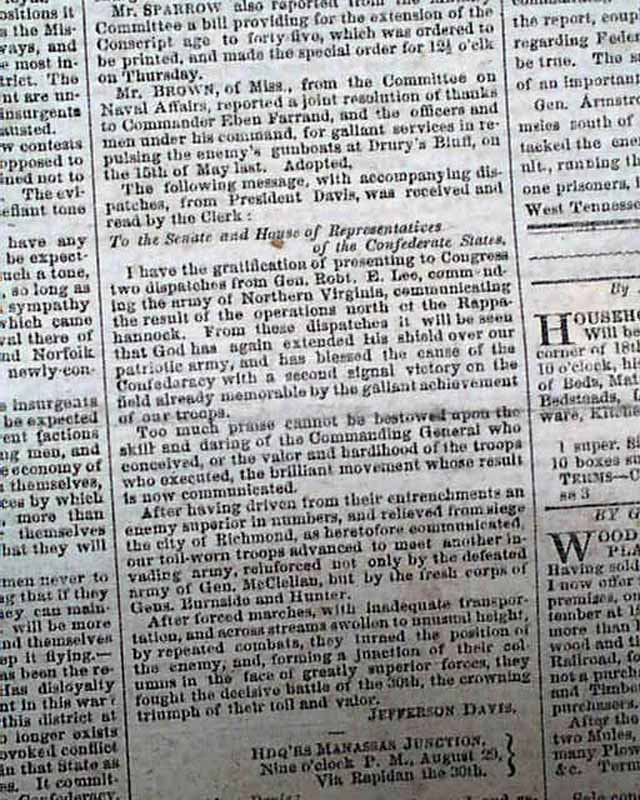 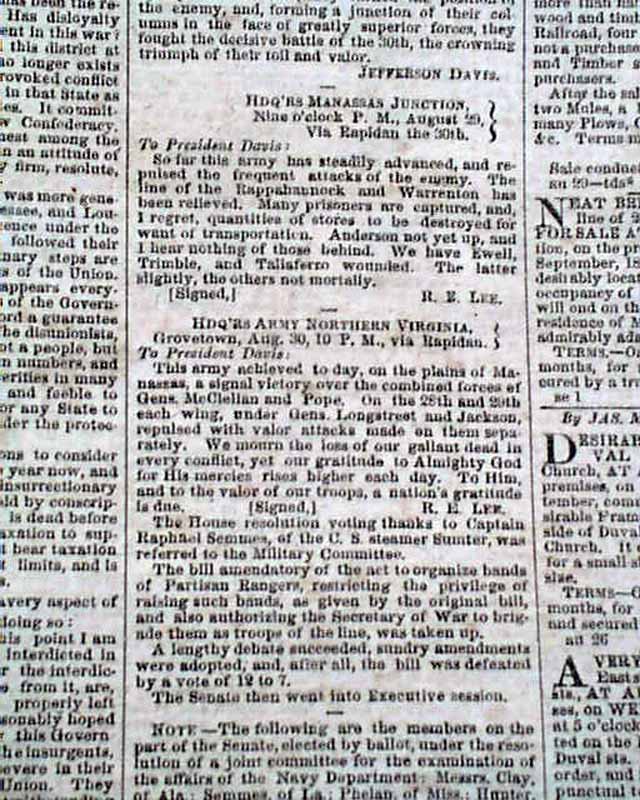 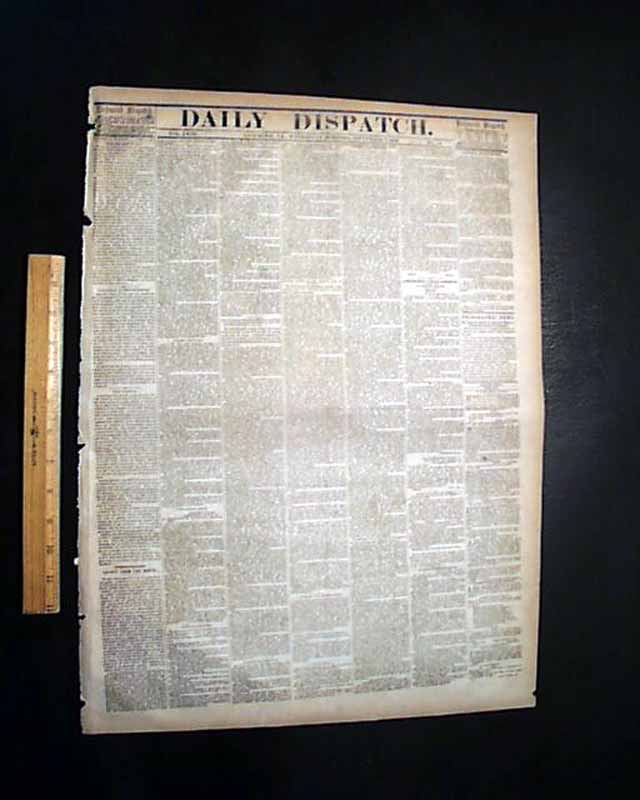 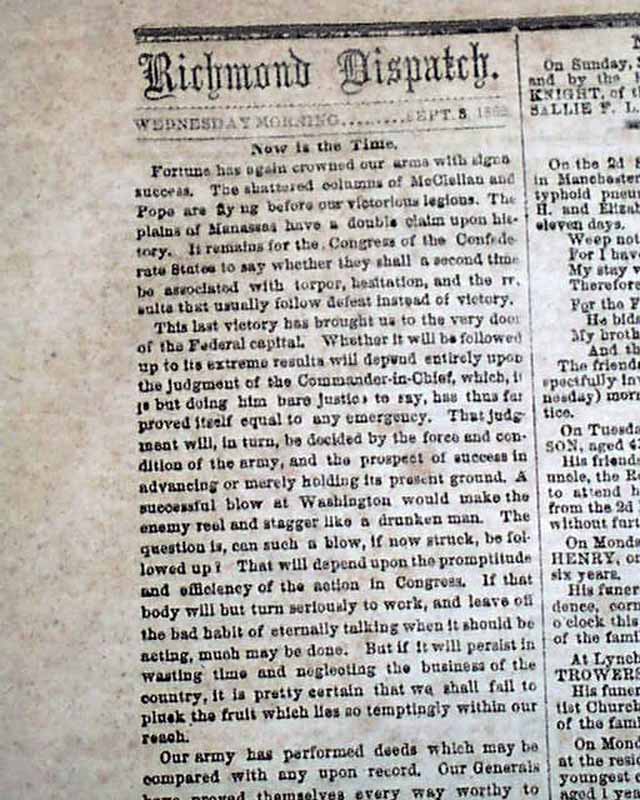 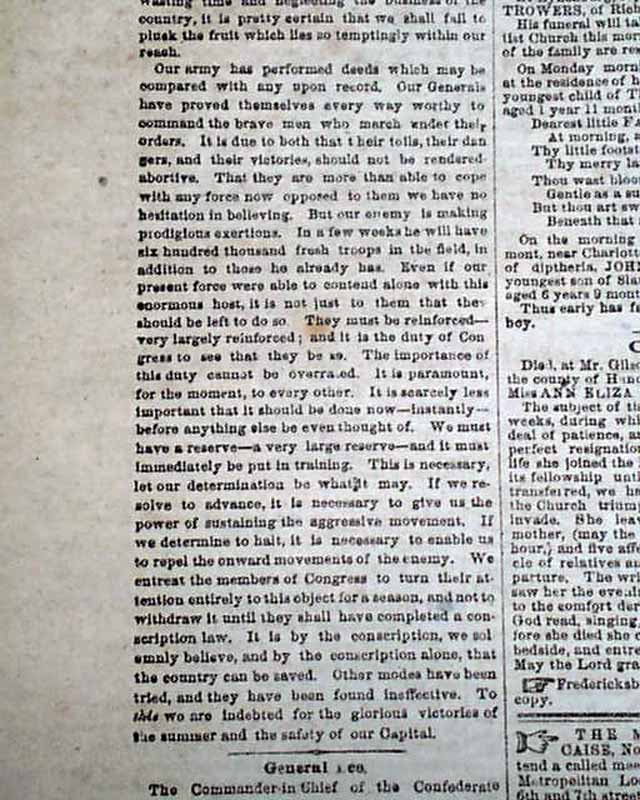 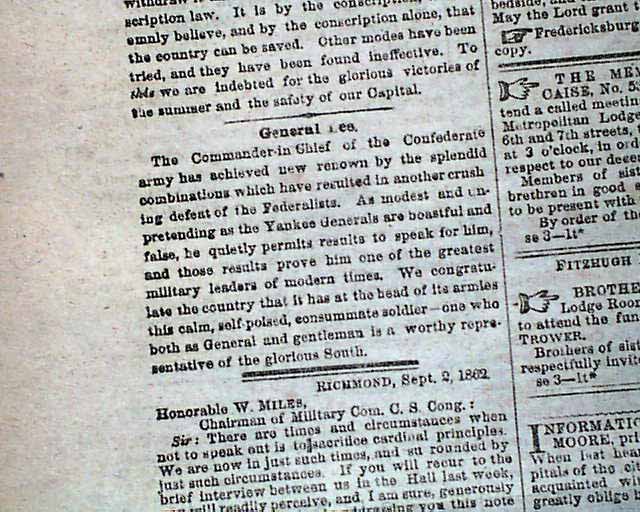 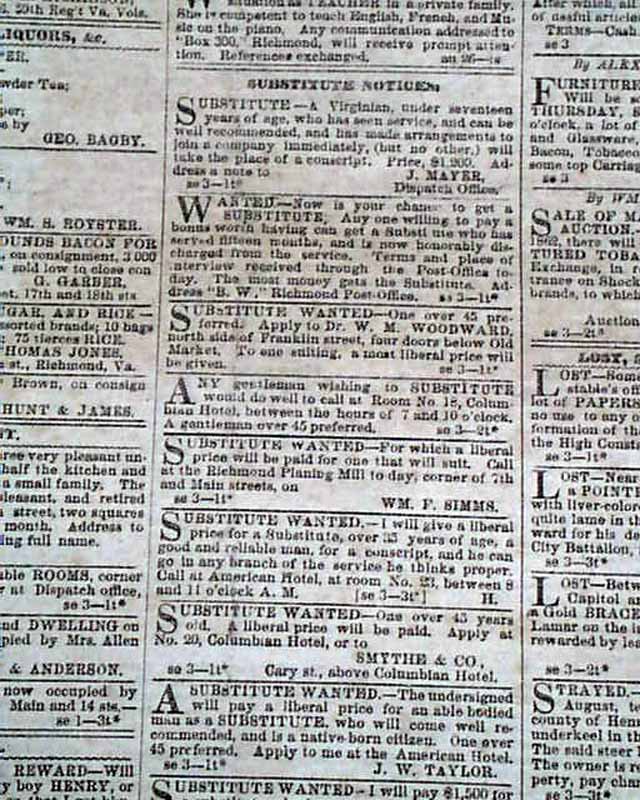