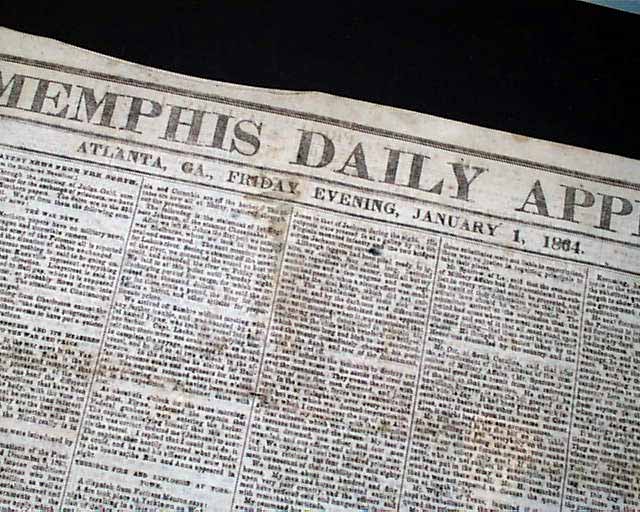 If the title and city of publication seem to be in conflict, they are not. See the information at the bottom of this listing.
Among the front page items are: "Cavalry" "A General Conscription" "The Yankees in Lee County" "Latest News From the North" "Confederate Congress" "Terrible Fire & Explosion at Yorktown" "From New Orleans" "Desperate Expedients" "The Sword of Montgomery" "Memphis News--Captured Confederates--Gettysburg and Waterloo..." and other smaller items.
The back page has much on the war as well with: "The New Year" "Our Army Correspondence" "Remounting Morgan's Command" "Port Hudson Incidents" "A Profitable Trip" "Yankee Schooner Captured" and other smaller items. There are several ads on the bkpg. as well including a very lengthy & detailed one for: "$1000 Reward ! Runaway Negroes. Stop Them !  Stop Them ! " with more.
Nice war-related content in a Confederate "Memphis" newspaper printed in Jackson, Mississippi. Single sheet, a few tiny worm holes near the middle, very nice condition.

This newspaper had a fascinating history during the Civil War. Memphis was a Confederate stronghold up through the Battle of Memphis on June 6, 1862, at which time the Yankees moved in and it became a Yankee city. Being a strong voice for the Confederacy, the "Memphis Appeal" newspaper would not continue under Yankee control. As Wikipedia notes: "...On June 6, 1862, the presses and plates were loaded into a boxcar and moved to Grenada, Mississippi, where it published for some time. The Appeal later journeyed to Jackson, Mississippi, Meridian, Mississippi, Atlanta, Georgia, and finally Montgomery, Alabama, where the plates were destroyed on April 6, 1865, only days before the Confederate surrender, halting publication of what had been one of the major papers serving the Southern cause." So this one newspaper published in six different Confederate cities during the Civil War.