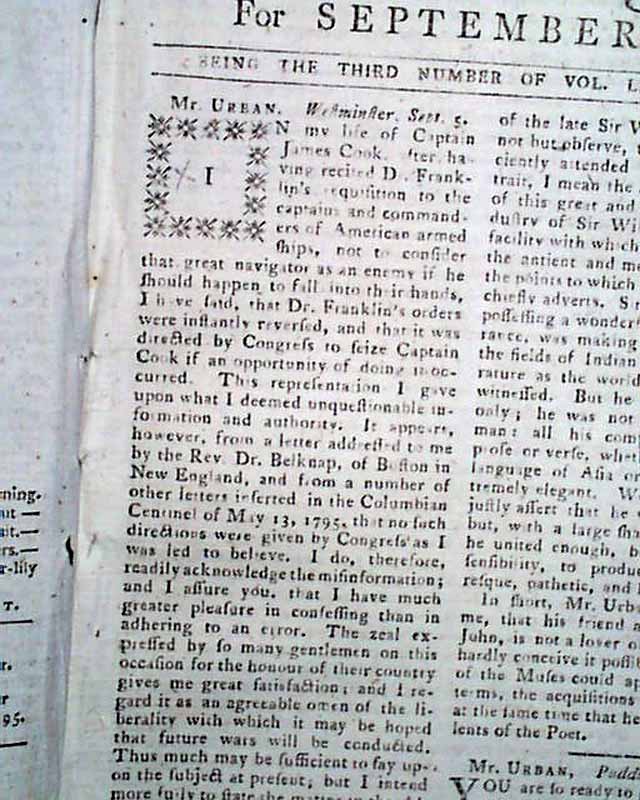 The first page makes reference to Capt. Cook and a letter from Ben Franklin: "...not to consider that great navigator as an enemy if he should happen to fall into their hands...".
Further inside are 1 1/2 pages taken up with the issue of whether George Washington was ever a commissioned officer in the British military, and includes a letter from 1754 signed in type: G. Washington. Also mention that: "...General Washington...from this happy life [of retirement] he was reluctantly withdrawn in 1775 when he was vested with the supreme command of the American armies..." Plus there is another letter from Washington: "...to Gen. Gage, Head Quarters, Cambridge, Aug. 11, 1775" signed in type by him: George Washington. This letter relates to the cruel treatment of American prisoners.
There is a brief item under "Review Of New Publications" titled: "A Voyage to New South Wales with a Description of the Country...of the Natives in the Vicinity of Botany Bay. By George Barrington, now Superintendent of the Convicts at Paramtta." This is present-day Australia.
Included are both full page plates called for.
Complete in 88 pages, 5 by 8 inches, full title/contents page with an engraving of St. John's Gate, in nice condition.