Home > Back to Search Results > Mordecai Noah & his plans for a Jewish refuge in America...
Click image to enlarge 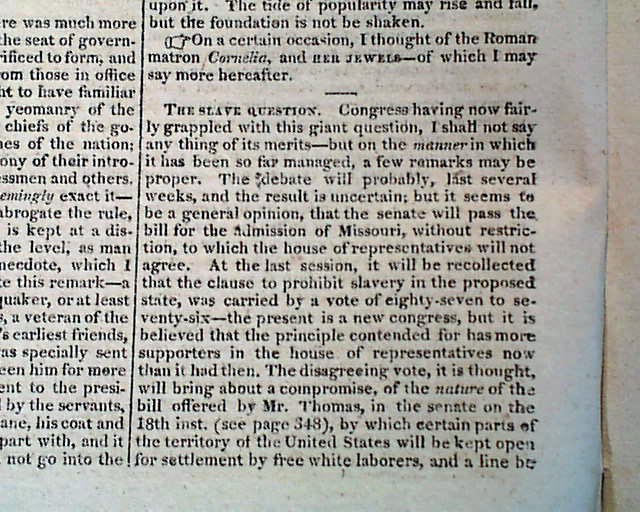 Mordecai Noah & his plans for a Jewish refuge in America...

Inside has over 2 pages taken up with: "The Slave Question" as it relates to the on-going Missouri Compromise debate.
Another page has: "The Jews" which concerns the famed Mordecai Noah, considered the first American-born Jew to rise to national prominence.
The article mentions in part: "Mr. Noah...has addressed a memorial to the legislature of New York praying that the state would authorise the sale of Grand Island in the Niagara river to him for the purpose of building a city thereon, and inviting a community of Jewish emigrants to that place..." with more on his grand plans.
This is one of the earliest reports we have found concerning Mordecai Noah's plan to found a Jewish "refuge" at Grand Island in the Niagara River, to be called "Ararat" after Mount Ararat, the Biblical resting place of Noah's Ark. It would ultimately become a failed venture.
Complete in 24 pages with the Supplement, 6 1/4 by 9 3/4 inches, very nice condition.