Home > Back to Search Results > Oroya Railroad Peru... The highest in the world!
Click image to enlarge 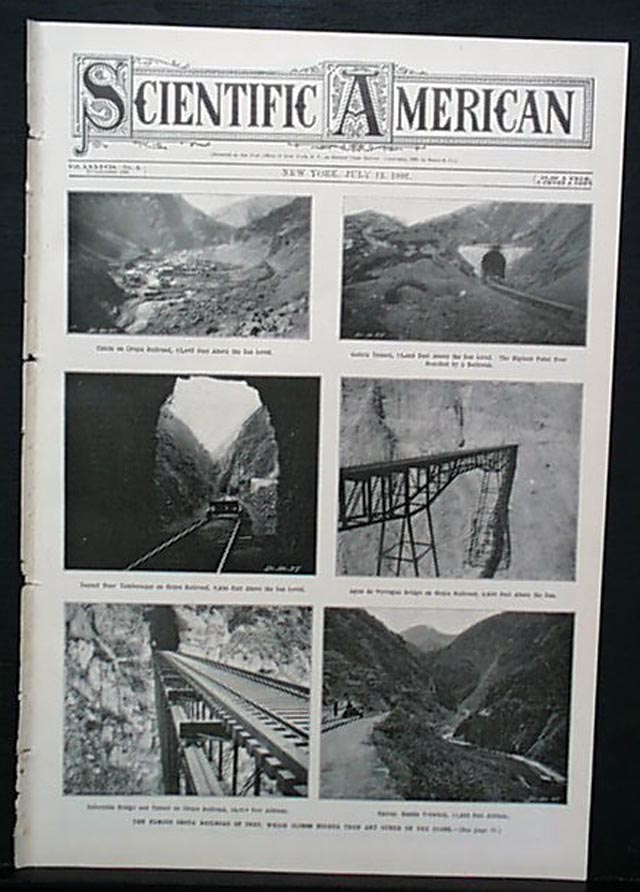 Oroya Railroad Peru... The highest in the world!


SCIENTIFIC AMERICAN, New York, July 12, 1902  The front page has 6 vignettes captioned: "THE FAMOUS OROYA RAILROAD OF PERU, WHICH CLIMBS HIGHER THAN ANY OTHER ON THE GLOBE". Additional related photos and considerable text are also found on inside pages.
Note: As mentioned in the caption above, at the time it was built, the railroad climbed higher than any other in the world. Eventually it height was exceeded by the Qingzang railway in Tibet (at Tanggula Pass in 2005), but as of this listing it remains in the 2nd highest.
Other articles with related photos include: Testing The New Bermuda Dock", Grass Houses Of The Wichita Indians", and "Armored Nests" (regarding cactus). The last two pages are taken up with period advertising.
Complete in 16 pages, a bit rough at the left spine, but overall good.
Very interesting advertisements as well, back in the day when many of the normal things we use today were just being invented.