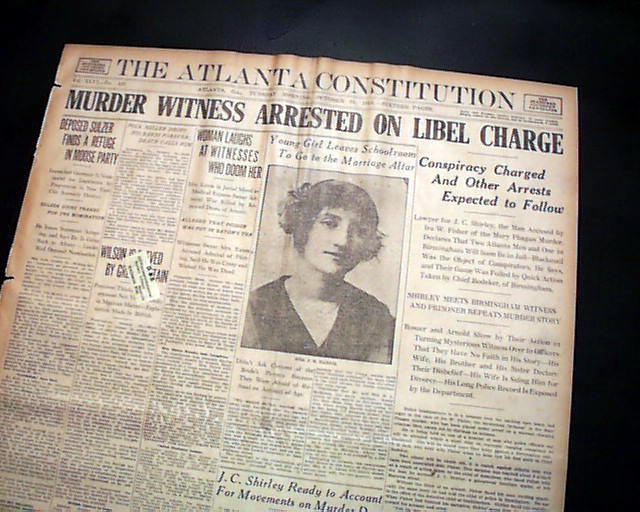 * Leo Frank, Mary Phagan murder case
* Best title to have (one of a kind for this date ?)

The Leo Frank case has become well known in American history for several reasons, not the least of which being the several film and television depictions of the trial, but also because Frank was a Jewish-American businessman, his case turning the spotlight on antisemitism in the United States and led to the founding of the Anti-Defamation League. There was also the element of Frank being cast as a representative of Yankee capitalism, a rich northern Jew lording it over vulnerable working women in the South.
Leo Frank was the superintendent of the National Pencil Company in Atlanta, convicted on August 26, 1913 of the murder of one of the factory workers, 13 year-old Mary Phagan. He would be found guilty and in 1915 sentenced to death, but the governor commuted the sentence to life imprisonment, to the great outrage of the citizenry. A mob of some 25 armed men kidnapped Frank from prison and hanged him.
The front page has a banner headline: "MURDER WITNESS ARRESTED ON LIBEL CHARGE"  with subheads. (see)
Complete in 16 pages, light toning and minor wear at the margins, generally good. Should be handled with care.