Home > Back to Search Results > Lincoln is assassinated... One of the most desired titles... An early edition...
Click image to enlarge 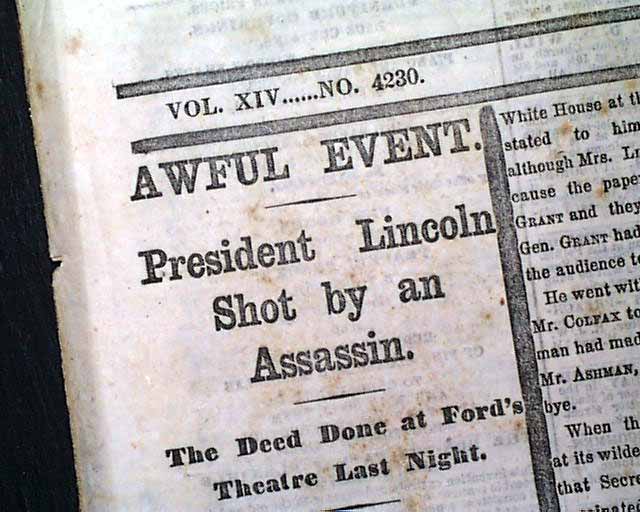 Lincoln is assassinated... One of the most desired titles... An early edition...

Not only this event, but this title remains one of the most desired by collectors; a very significant event in American history reported by one of the most respected newspapers in the country.
The first column heads tell it all: "AWFUL EVENT" "President Lincoln Shot by an Assassin" "The Deed Done at Ford's Theatre Last Night" "The Act Of A Desperate Rebel" "Attempted Assassination of Secretary Seward" "Rumored Attempt on the Life of Mr. Stanton" "Details of the Dreadful Tragedy". One can only imagine the horror of finding this report in the morning paper at a time when the nation should have been in celebration of the end of the Civil War.
The report has much detail with various timed dispatches as the news arrived in the newsroom. The first dispatch has Lincoln as still being alive: "The President was shot in a theatre tonight, and is, perhaps, mortally wounded. Secretary Seward was also assassinated." The "second dispatch" goes on with some details: "...The theatre was densely crowded...During the third act & while there was a temporary pause for one of the actors to enter, a sharp report of a pistol was heard, which merely attracted attention but suggesting nothing serious until a man rushed to the front of the President's box, waving a long dagger in his right hand, and exclaiming 'Sic semper tyrannis" & immediately leaped from the box...to the stage beneath...The screams of Mrs. Lincoln first disclosed the fact to the audience that the President had been shot...all present rose to their feet...many exclaiming 'Hang him! hang him!...The President was in a state of syncope, totally insensible & breathing slowly. The blood oozed from the wound at the back of his head...all hope was gone. The parting of his family with the dying President is too sad for description..." with more. This is followed by: "Another Account" still with an April 14 dateline, which includes: "...The President's wound is reported mortal. He was at once taken into the house opposite the theatre." The report datelined: "Midnight" begins: "The President is reported dead. Cavalry and infantry are scouring the city in every direction for the murderous assassins...".
Note that this is one of the earlier editions, as the President was still alive at the point this went to press with the latest news being from the "Midnight" dispatch. Lincoln actually passed away at 7:22 a.m. We have sold other editions with further dispatches of "1 o'clock", "1:30 o'clock A.M." "2 o'clock A.M." and "2:12 A.M", lacking in this issue as it was an earlier edition.
There is a small black-bordered item on the editorial noting: "The events of last night in Washington will strike with profound horror the whole American people. At this moment of writing, we have only a partial announcement of the facts, and have neither the date nor the spirit for comment."
Complete in eight pages, one small printing crease to the right side not affecting any Lincoln content, very nice, clean condition.