Home > Back to Search Results > "Indians Can go Where They Please"... Sitting Bull...
Click image to enlarge 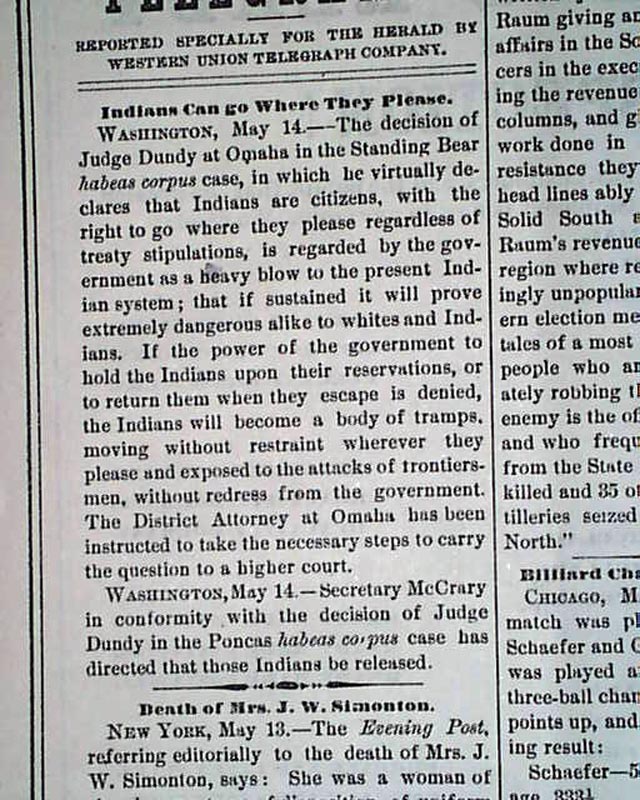 "Indians Can go Where They Please"... Sitting Bull...

Page 5 lists a telegram stating: "Indians Can go Where They Please", after the Judge Dundy ruling in the Standing Bear v. Crook case.  This ruling was: "regarded by the government as a heavy blow to the present Indian system; that if sustained it will prove extremely dangerous alike to whites and Indians." This decision is seen by many as the antithesis of the "Dred Scott Decision" in regard to Native American Citizenship.
Pairing well with this historic decision is the coverage on page 4: "FORTY-SIXTH CONGRESS" with "The President protem laid before the Senate a message from the President of the United States in reply to the resolution of the 7th inst, requesting formation relative to the alleged unlawful occupation of the Indian Territory".
The front page content includes: "GOING TO SEE SITTING BULL"  with subheading: "An Excursion party About to Visit the Old Man" which includes a description of Sitting Bull's Camp, "and having an exceptionally good opportunity to see genuine savage lie as exemplified in the home of the most noted Indian warrior living."
Additionally, page 2 includes several fascinating articles: "STATE RIGHTS", "THE IRREPRESSIBLE CONFLICT", which covers the conflict between capitalists and laborers and "That there are sometimes conflicts between capitalists and laborers, is certainly true, but it is truer still that these conflicts are unnatural and injurious to both parties."
Page 4 has" "THE GALLOWS", a discussion on humane ways to enact Capital Punishment.
This issue is packed with tremendous, country forming news of the day from railroad disputes to Women's Suffrage.
Complete in 8 pages with minor binding holes in the left margin.  Very nice condition.