Home > Back to Search Results > First anniversary of "Juneteenth", a national holiday...
Click image to enlarge 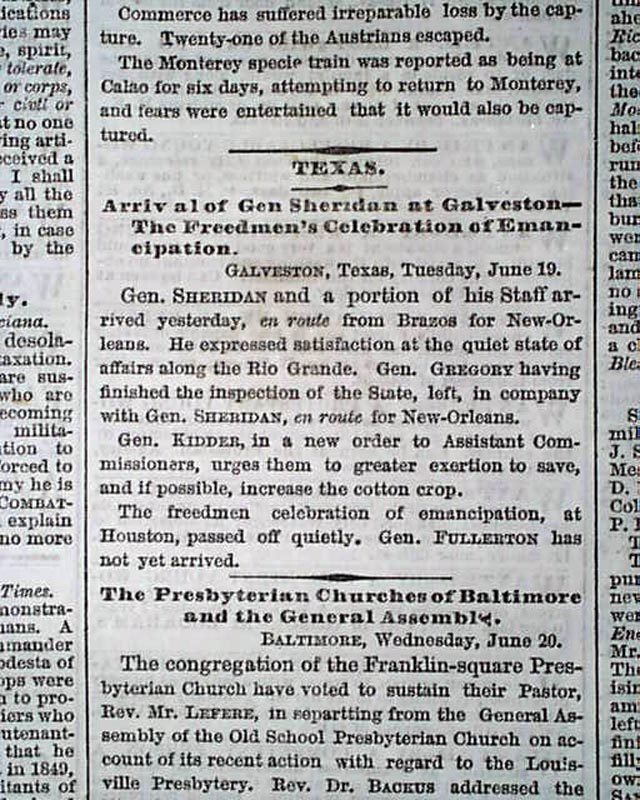 As you may know, a period report of the first "Juneteenth" event on June 19, 1865, when Union troops entered Galveston, Texas and announced to more than 250,000 enslaved blacks that they were free is almost impossible to find. In fact, we searched dozens of titles from the years to follow and turned up only a fe mentions.
However, we did discover a somewhat oblique mention of the first anniversary of what was then known in Texas as "Jubilee Day", which was renamed "Juneteenth" in 1867.
Specifically, page 5 has a small report headed: "Texas - Arrival of Gen. Sheridan at Galveston--The Freedmen's Celebration of Emancipation" with a dateline from Galveston, June 19. The end of the report notes: "...The freedmen celebration of emancipation, at  Houston, passed off quietly. Gen. Fullerton has not yet arrived."
A quite rare and early reference to what is now a national holiday.
Complete in 8 pages.  There is a small tear on the front page in the top margin (see images) which does not impact described content.  Otherwise, in very nice condition.