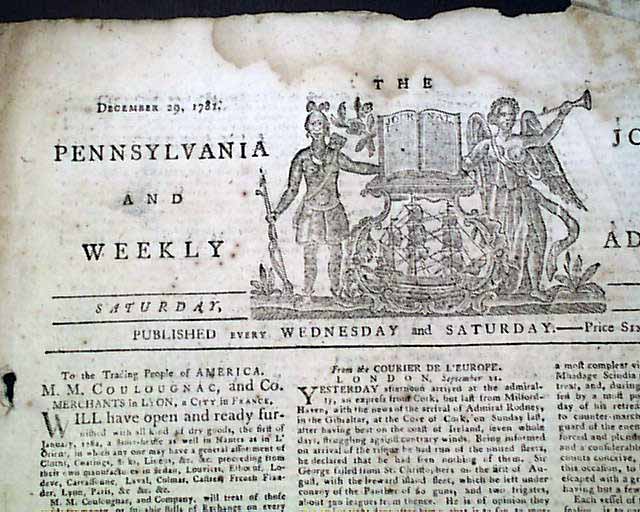 I have always thought this newspaper has one of the finest masthead, featuring an uncommonly large engraving with an Indian and an angel on either side of the "Journal", plus a 3-masted ship & other embellishments. A decorative issue for display.
Inside has a letter from St. Augustine noting: "...We are very apprehensive that the Spaniards mean to pay us a visit in the spring, but if we had 4 or 500 men more here it would not be an easy matter to take this place...". Another news report notes: "...An embarkation of 2 or 3000 men is taking place at New York, said to be for South Carolina; from whence they have an account of an action but as yet we cannot learn the issue, however the sending a reinforcement is a good omen. Whatever their news from Carolina may be, Mr. Rivington has given his reads...what an elegant writer in the same paper speaking of a lye, calls a whapper."
Also: "....letter received from Staten Island...says General Leslie has killed & destroyed General Greene's whole army, he rebels make long faces and say it is the greatest loss they ever met with. The account was brought by express; I believe it, and make no doubt but you will soon have a confirmation. The person who brought the letter added that Gen. Greene was killed in the action."
This is reference to the historic Battle of Eutaw Springs in South Carolina. It was a loss for General Greene but he was not killed, and it also forced the British back towards Charleston, regaining most of South Carolina for the Americans.
Four pages, never-trimmed margins, some damp staining above the masthead, generally very nice condition.