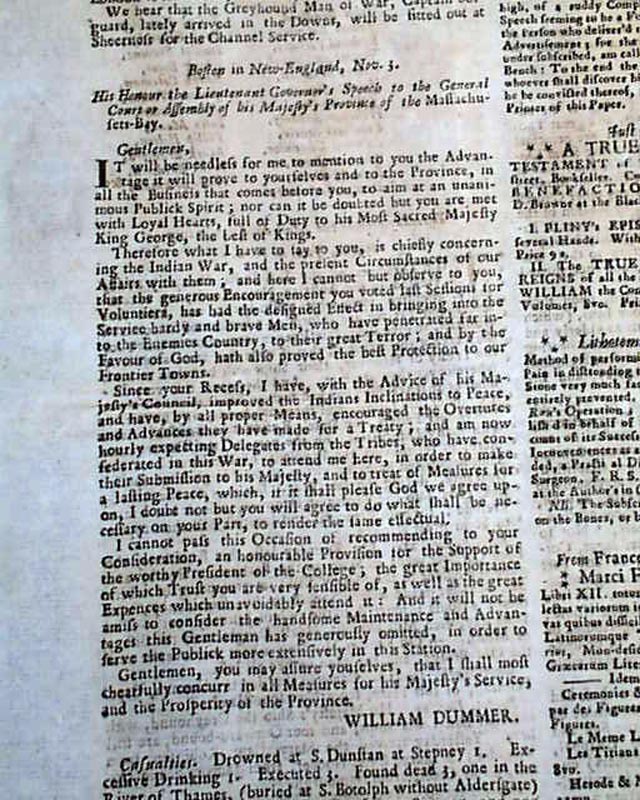 This early title typically has little if any American content, but this issue is an exception, and a notable one at that.
The back page has a speech signed in type by William Dummer, the Lt. Governor of Massachusetts Bay. This speech is concerning events what is known as "Dummer's War" with the local Indians, with mention that he is hopeful of peace negotiations with the Indians.
A few bits note in part: "...what I have to say to you is chiefly concerning the Indian War and the present circumstances of our affairs with them...I have...improved the Indians inclinations to peace, and have...encouraged the overtures and advances they have made for a treaty and am now hourly expecting delegates from the tribes, who have confederated in this War, to attend me here in order to make a lasting peace..." with more.
Dummer's War was a series of battles between the New England colonies and the Wabanaki Confederacy who were allied with New France.
Quite rare to find period newspaper reports of this somewhat obscure war between Native Americans and English colonists in America.
Single sheet newspaper with two handsome engravings in the masthead, nice condition.