Home > Back to Search Results > Cook's voyage to the Northwest coast, with the rare plate of natives from Oonalashka...
Click image to enlarge 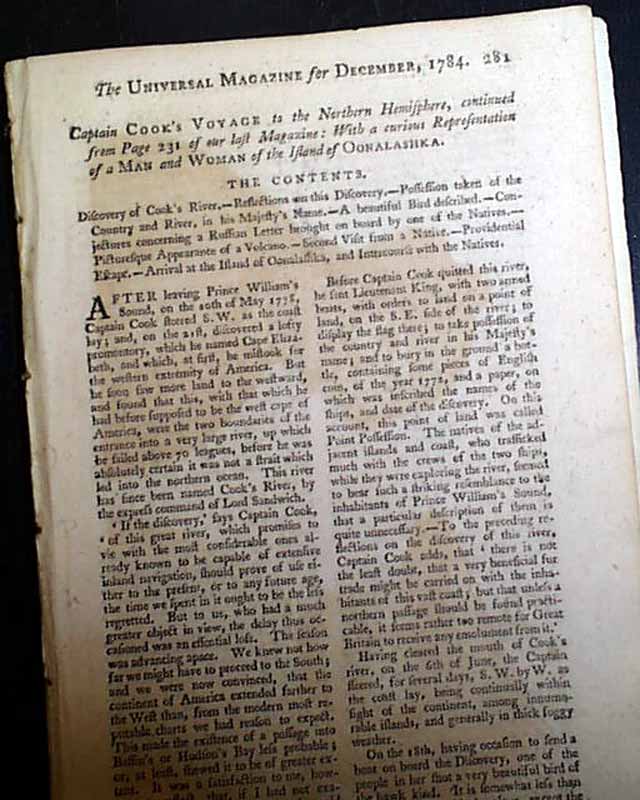 Cook's voyage to the Northwest coast, with the rare plate of natives from Oonalashka...

Included also is the "Supplement" issue.
This magazine--much more scarce than the Gentleman's Magazine--published in serial form the account of: "Captain Cook's Voyage to the Northern Hemisphere...", this issue containing reports from May, 1778 when they were exploring the Northwest coast of North America. As noted in "The Content" at the top of the first page, subheads include: "Discovery of Cook's River--Possession Taken of the Country & River in his Majesty's Nae--Picturesque Appearance of a Volcano--Arrival at the Island of Oonalashka..." and a bit more (see), with the very detailed text taking 3 pages.
Of significance is that the rare full page plate is still present, showing: ""Man of Oonalashka" and a: "Woman of Oonalashka". This plate is in very nice condition.
The "Supplement" has the continuation of Cook's narrative with an additional 6 pages of detailed text. It also contains 2 unrelated plates, one a foldout.
Contains 124 pages in total. As was typical with the Universal Magazine, it had no full title/contents page but rather an outer wrapper which served that purpose, but the wrappers were typically removed when the issues were bound. The title & date are printed at the top of page 1. Measures 5 1/4 by 8 1/4 inches, good condition.