Home > Map of Veracruz & the castle of San Juan...
Click image to enlarge 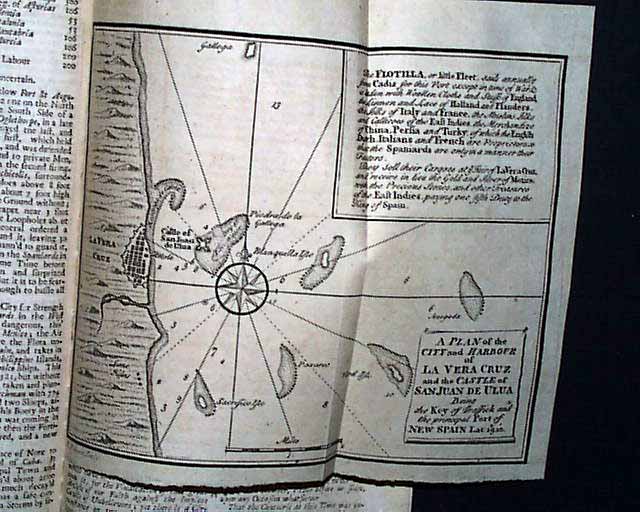 THE GENTLEMAN'S MAGAZINE, London, May, 1740  The prime feature of this issue is the nice foldout map of Vera Cruz, Castle of San Juan, Port of New Spain titled: "A Plan of the City and Harbour of La Vera Cruz and the Castle of San Juan De Ulua, being the Key of Traffick and the Principal Port of New Spain", folding out to measure 6 by 7 inches. There is a related article headed: "Account of the Strength of Fort St. Augustine in Florida, the Nearest Settlement of the Spaniards to Georgia, Vera Cruz [Veracruz], in the Gulf of Mexico, and St. Jago de Cuba." which mentions James Oglethorpe with text including: "...About 7 leagues below Fort St. Augustine are two forts, the one on the north and the other on the south side of a large lake; General Oglethorpe, in a late expedition, has destroyed the last & taken possession of the first..." with more.
Among the other articles: "Sailors Often Disappointed"  "Objections to the Conduct of the War" "Last War Concluded by a Shameful Treaty" "Porto Bello Served up as a Desert" "Celebacy Proved a Breach of Morality & Religion" "Strength of the British Islands in the West Indies" "Vera Cruz taken by a Dutchman" & more.
Complete in 56 pages with full title/contents page. 5 by 8 1/2 inches, tiny pin holes at the blank spine, very nice condition.