Home > Back to Search Results > Adams's inauguration: the peaceful transfer of power...
Click image to enlarge 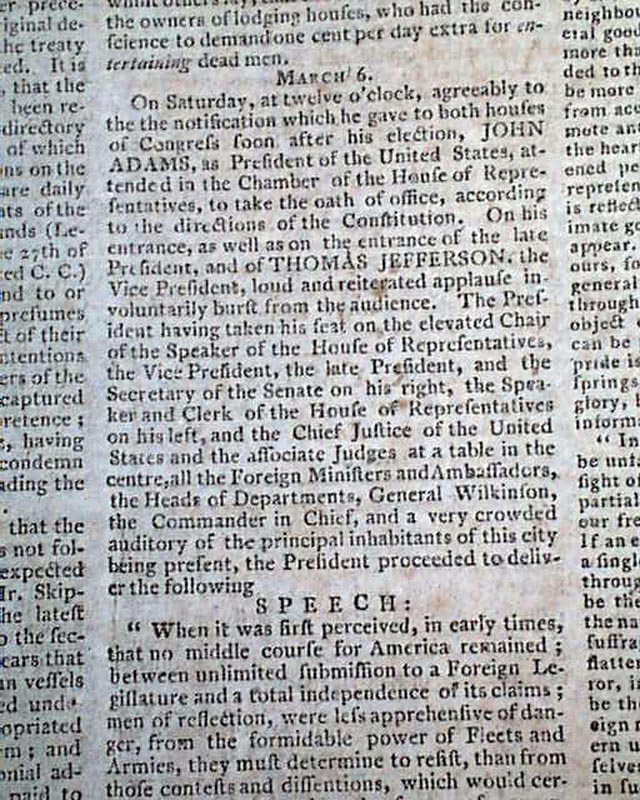 A very historic issue as it reports the true test of the great American republic: the peaceful transfer of power.
Page 2 has a report noting in part: "On Saturday at twelve o'clock...soon after his election, JOHN ADAMS as President of the United States attended in the Chamber of the House of Rep. too take the oath of office according to the directions of the Constitution. ON his entrance, as well as on the entrance of the late President, and of THOMAS JEFFERSON, the Vice President, loud & reiterated applause involuntarily burst from the audience..." with further details.
Then the report continues with the full text of Adams' inaugural address, headed "Speech", and caring over to page 2. This it continues with: "After concluding his speech, the President descended from his seat to receive his oath of office from the Chief Justice who pronounced the following constitutional oath with great solemnity, which was repeated by the President in an equally audible and solemn manner. 'I do solemnly swear, that I will faithfully execute the office of President of the United States, and will, to the best of my ability, preserve, protect, and defend the constitution of the United States.' "
Then what follows are reports of the proceedings of the ceremonies. Then some wonderful editorial comments: "This ceremony & spectacle must have afforded high satisfaction & delight to every genuine Republican. To behold a fellow citizen, raised by the voice of the People to be the First Magistrate of a Free Nation, and to see at the same time, he who lately filled the Presidential Chair attending the inauguration of his successor in office as a private citizen, beautifully exemplified the simplicity and excellence of the Republican System in opposition to hereditary, monarchical government..." with more.
This last comment cannot be over emphasized. Considering that history has typically proven that the transfer of power within countries was, if not determined by heredity alone was the result of bloody fights, battles and general chaos, this smooth transition of power was a novelty which proved the newly-tested American Constitution was a successful document.
Four pages, never-trimmed margins, one older tape mend near the inside spine, nice condition.