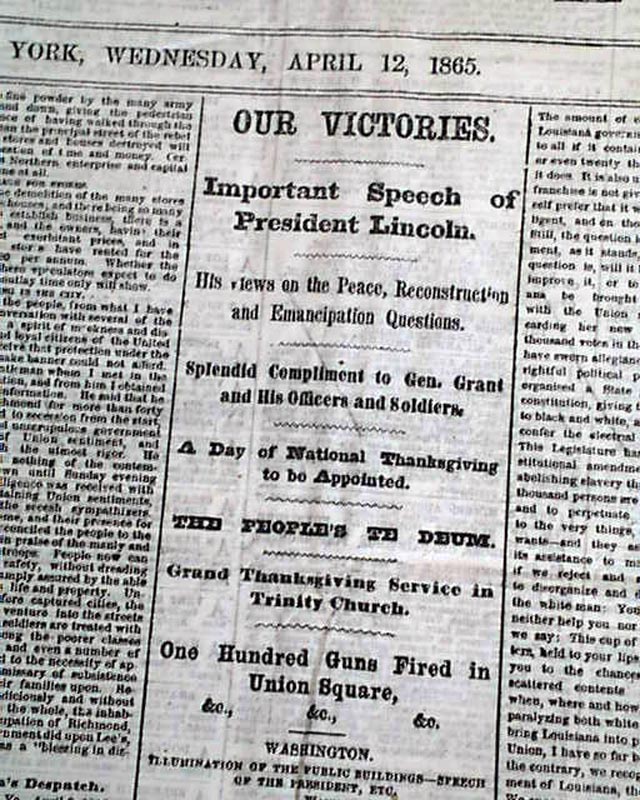 This issue was printed just 2 days prior to Lincoln's assassination, with the front page containing what is noted as Lincoln's last speech.
The front page heads include: "OUR VICTORIES" "Important Speech of President Lincoln" "His Views on the Peace, Reconstruction & Emancipation Questions" "Splendid Compliment to Gen. Grant & His Officers & Soldiers" and more. The speech datelined April 11 begins: "We meet this evening not in sorrow, but in gladness of heart. The evacuation of Petersburgh & Richmond & the surrender of the principal insurgent army, give hopes of a righteous & speedy peace whose joyous expression cannot be restrained..." & takes well over a full column.
Page 4 has: "Washington" "Important Proclamation by the President" with more, and signed in type: Abraham Lincoln. This Proclamation (#128) is dated April 11, 1865, three days before his assassination, and was to be his last.
Other front page heads include: "RICHMOND" "Important Measures to Restore Virginia to the Union" "General Lee's Promotion to the Command of the Rebel Armies" "GRANT" "Rumors of Peace Propositions from the Enemy's Lines" and more.
Eight pages, never bound nor trimmed, nice condition.