Home > Back to Search Results > Death of Jesses James, in a rare Western newspaper...
Click image to enlarge 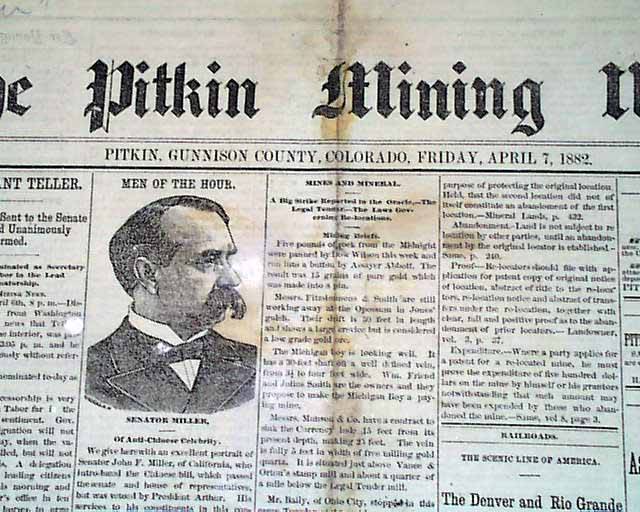 Death of Jesses James, in a rare Western newspaper...

A very rare title which lasted about 5 years. This is a volume one issue. Gregory (Union List of American Newspapers) notes that this title was held by only one institution in the United States, which has now been purchased by us.
The front page has a report: "The dispatches of the 3rd announce the death of the notorious outlaw Jesse James at his own house in St. Joe, Mo., ...He was shot by his cousin by marriage, Robt. Ford...Fully 15,000 people attended the inquest. Jesse James has been a desperado for the last 20 years, being forced into Bill Anderson's noted band of guerrillas at the age of 17, & afterwards joining Quantrell...verified the report beyond a doubt, and Jesse James has certainly been killed for the last time." (see)
This small Colorado town has a current population of only 66 residents. Wikipedia notes that "Pitkin was founded in 1879, and is said to be Colorado's first mining camp west of the Continental Divide. Originally named Quartzville, it was renamed to honor Governor Frederick W. Pitkin."
Complete in 4 pages, rejoined at the spine, page 2 has tape mends at the folds, generally good.