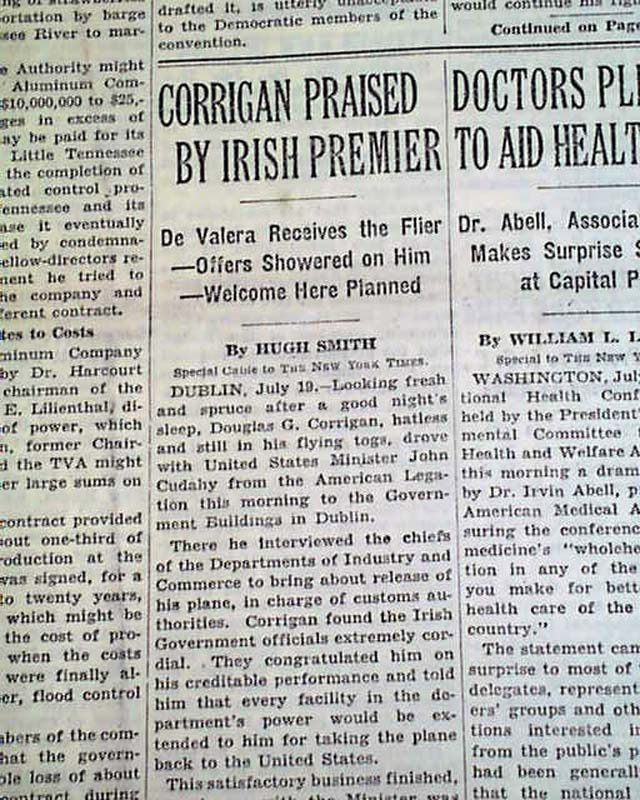 The front page has a one column heading: "CORRIGAN PRAISED BY IRISH PREMIER" with subhead. (see) Coverage continues on page 12 with related photo. A printing flaw within the photo. (see)
Other news, sports and advertisements of the day. Complete in 38 pages, this is the rare rag edition that was produced on very high quality newsprint, with a high percentage of cotton & linen content, allowing the issues to remain very white & sturdy into the present. Given the subscription cost, libraries & institutions rather than individuals were the primary subscribers of these high-quality editions. Very nice condition.
source: wikipedia: Douglas "Wrong Way" Corrigan (January 22, 1907December 9, 1995) was an Americanaviator born in Galveston, Texas. In 1938, after a transcontinental flight from Long Beach, California, to New York, he flew from Floyd Bennett Field in Brooklyn, New York, to Ireland, even though he was supposed to be returning to Long Beach. He claimed that his unauthorized flight was due to a navigational error, caused by heavy cloud cover that obscured landmarks and low-light conditions, causing him to misread his compass. Corrigan, however, was a skilled aircraftmechanic (he was one of the builders of Charles Lindbergh's Spirit of St. Louis) and a habitual risk-taking maverick; he had made several modifications to his own plane, preparing it for transatlantic flight. Between 1935 and 1937, he applied several times, unsuccessfully, for permission to make a nonstop flight from New York to Ireland, and it is likely that his "navigational error" was a protest against government "red tape"; however, he never publicly acknowledged having flown to Ireland intentionally.