Home > Back to Search Results > The rare "steamer edition" from 1868...
Click image to enlarge 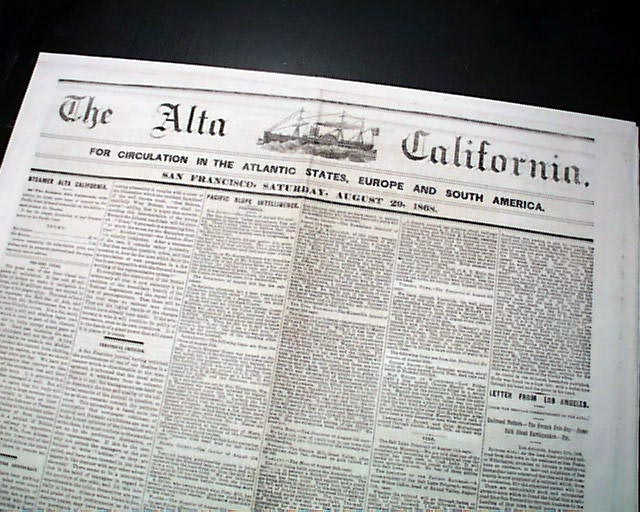 
THE ALTA CALIFORNIA - For Circulation In The Atlantic Started, Europe And South America, San Francisco, Aug. 29, 1868  At the top of the first column is: "Steamer Alta California" noting that it is: "...issued trial-monthly on the sailing of each steamer for Panama. It has the largest circulation of any Steamer paper on the Pacific Coast."
A very rare & early newspaper from California as this is what is known as a "steamer edition" printed specifically for distribution back East and elsewhere, hence shipping was done exclusively by steam ships. Such editions are much more rare than the "regular" editions, and Gregory notes this title had steamer editions from 1849-1869.
There is no volume or issue number noted.
As would be expected the content within is mostly concerning events on the West Coast so as to inform those in the East and elsewhere.
Complete in 8 pages, never bound nor trimmed so it folds out to one large sheet, great condition.