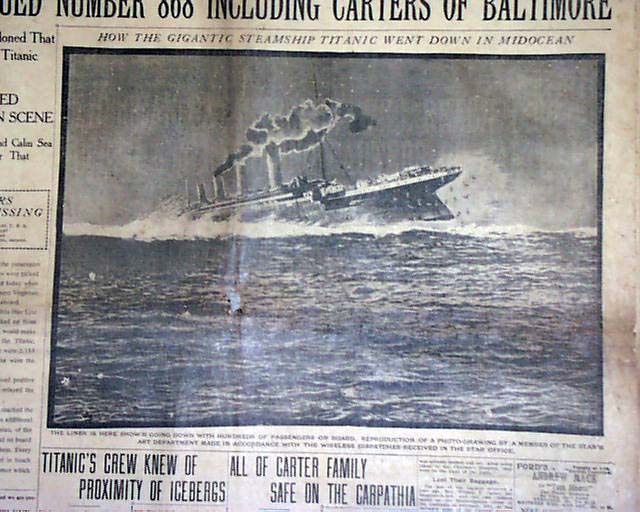 
THE STAR, Baltimore, April 16, 1912 This is one of the better Titanic issues to be had as the front page is dominated by a rather huge illustration of the Titanic in the process of sinking, headed: "How The Gigantic Steamship Titanic Went Down In Midocean" with the caption reading: "The liner is here shown going down with hundreds of passengers on board. Reproduction of a photo-drawing by a member of the Star's art department made in accordance with the wireless dispatches received in the Star office."
A nice two-line banner headline announces: "DEATH'S TOLL IN MIDOCEAN CATASTROPHE WILL REACH 1490. RESCUED NUMBER 868 INCLUDING CARTERS OF BALTIMORE" and a variety of subheads including: "Hope Practically Abandoned That Any Others Aboard Titanic Were Saved" "Steamers Arrived Too Late On Scene" "Titanic's Crew Knew of Proximity of Icebergs" "Noted Passengers Of Titanic Missing".
Curiously page 3 contains an ad for the sailing of the Lusitania, which would meet its own horrific fate 3 years later.
A 14 page issue, a wear hole in the print is near the very center, below the ship, has been repaired from the reverse which causes it to be much less noticeable, some lite dirtiness and some wear at the margins, more-so to the inside pages of the right margin, but otherwise in rather nice condition.
Certainly one of the more displayable issues we have offered with a front page graphic which is so desired yet rarely found.