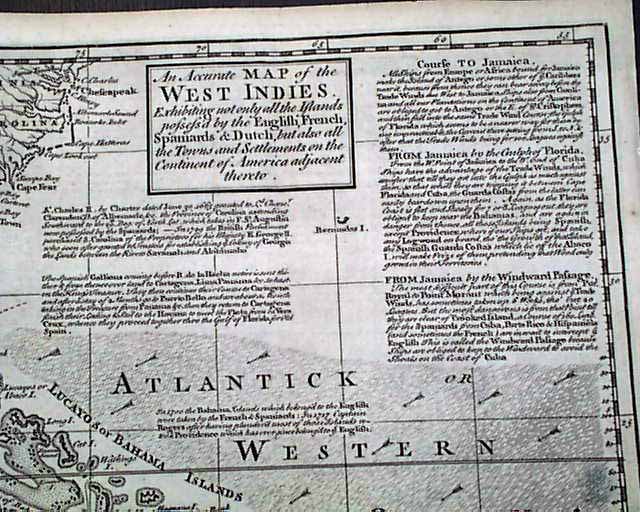 Certainly the prime feature of this issue is the terrific foldout map titled: "An Accurate Map of the WEST INDIES, Exhibiting not only  all the Islands possessed by the English, French, Spaniards, & Dutch, but also all the Towns and Settlements on the Continent of America adjacent thereto."
This map shows all of the Caribbean Islands plus the northern portions of South America, Central America, and much of the Southern & Southeast portions of the United States, including the Chesapeake Bay down to Florida (a very distorted interpretation) and west to Louisiana and Texas (see the many photos). There are also hundreds of towns and islands named along with descriptive text.
This map measures 12 1/4 by 15 1/4 inches when unfolded. Typically these large maps have many tears & various damage, but this map is in great condition--rarely found as such.
The first page in this magazine has a note reading: "The commerce, Navigation, and different Settlements in America, having been the subject almost of every Magazine, we have, with this, given a View of them in an accurate Map of the West Indies; and as we shall have frequent occasion, from its being now the seat of action, to refer to, & explain the Geography of these places, we do not doubt its being acceptable to our Readers, especially as this map alone sells for 6d. We are preparing others."
Another article of note is: "Discourse on Hebrew Customs Concluded" which is a continuation from the December, 1739 issue.
Under the "Historical Chronicle" near the back is a report which includes: "...Being a general fast was observed with great decency & solemnity throughout the city, & by the Jews also in their several Synagogues...".
Among the other articles are:  "Account of the Rise of Free Masons" "Roguery as Beneficial to Politicks as Luxury to Trade" & more. The Table of Contents also notes the inclusion of this map, verifying the date and it belonging to this issue.
Complete in 40 pages, 5 by 8 1/2 inches, full title/contents page featuring an engraving of St. John's Gate, tiny binding holes at the blank spine margin, very nice condition.