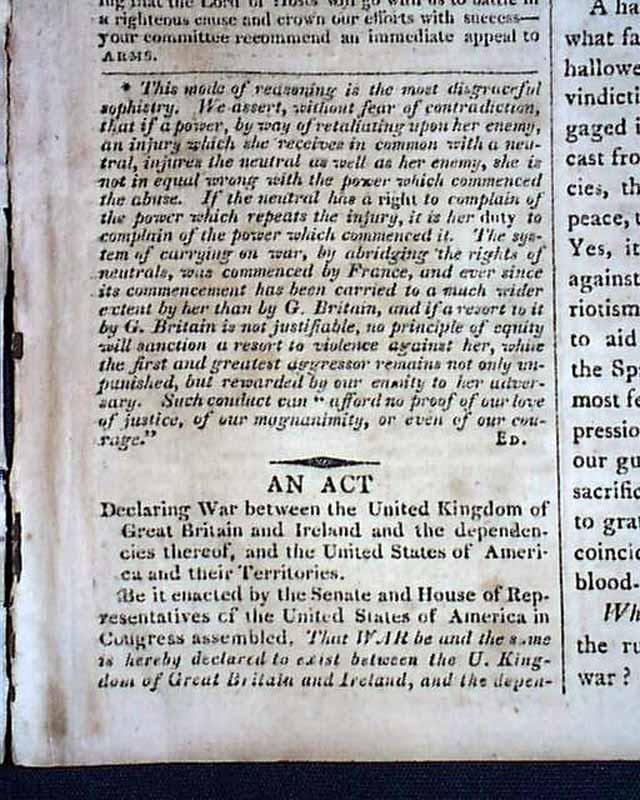 On page 3 near the top of the second column is "A Proclamation" issued by President James Madison confirming the Congress declaration of war against Great Britain, stating in part: "...Now therefore, I JAMES MADISON, President of the United States of America, do hereby proclaim the same...". The Proclamation, dated June 12, 1812, is signed in type: James Madison and James Monroe, the Secretary of State.
Previous to the Proclamation is: "An Act issued by Congress Declaring War between the United Kingdom of Great Britain and Ireland and the dependencies thereof, and the United States of America ...", also signed in type: James Madison.
Related content includes a lengthy page 2 "Message" to Congress signed in type: James Madison. Hereafter is a lengthy Declaration issued by the Committee on Foreign Relations that concludes on page 3. And page 3 has some anti-war sentiments with "War Against England" which begins: "War has been declared by the government of the United States against the commercial section of the country, and is to be carried on by the aid of the British Navy." as well as: "The war has at length commenced. We have tried to reason; we have attempted to arrange our thoughts, & to offer a comment upon it. But we are astonished, oppressed, overpowered; we have no spirit no heart for the effort..." with more.
Four pages, some staining in the President's Proclamation as well as in the Declaration issued by the Committee, some foxing, otherwise in good condition.