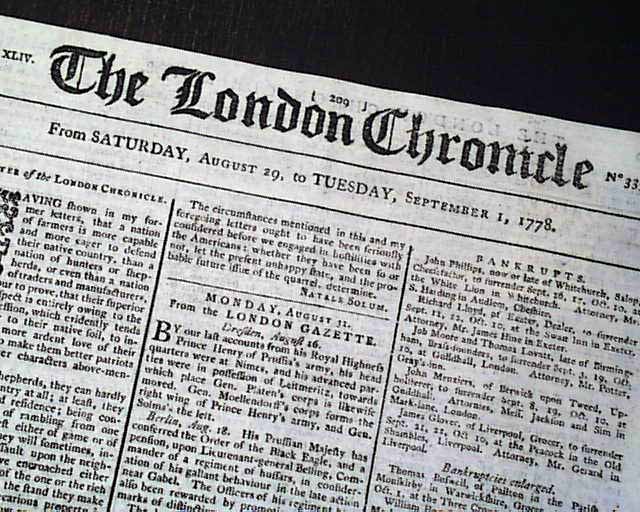 Page 2 has: "An address of the Oneida Sachems to a party of young warriors, bound to Gen. Washington...", for those joining the military forces under Washington, and includes in part: "...if you observe good order, sobriety, and play the man, your deportment in this case will resound through the American army, be noticed by General Washington, the chief warrior...".
Half a page is taken up with a letter: "To my Fellow Subjects, who are Truly the Friends of their King and Country" which is very pro-British concerning the Revolutionary War, including in part: "...I confess that, during our contest with the ingrates of America, although I have beheld with pleasure that the British forces, with their usual intrepidity & ardour, have defeated the rebels in every action, even in those under Burgoyne previous to the day in which his army was obliged to surrender to the mandates of famine..." (referring to his surrender at Saratoga). Much more.
Over a page is taken up with: "A Voyage to Newfoundland and Sallee". Another  report includes: "...gentleman who crossed the Jerseys with Gen. Clinton...says, 'That the troops were not only greatly incommoded on their march by excessive heat, but being on every side so hard pressed they could not get the proper rations..." & more.
Eight pages, 8 1/4 by 11 inches, very nice, clean condition.