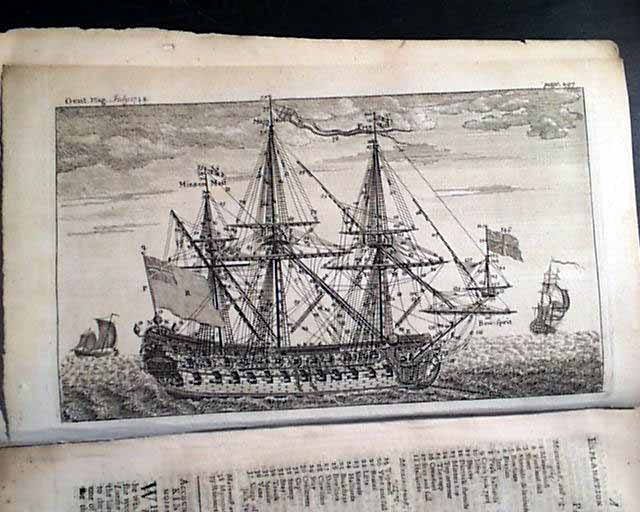 Certainly the feature item in this issue is the terrific, full page illustration of: "A Ship Of War" with considerable detail, and with most of the facing page having the "Explanation to a Ship of War of the third Rate with Rigging, &c., at Anchor".
The "Explanation" numerically identifies 148 parts noted on the plate as well as 17 other features which are listed alphabetically from A to R. A terrific plate for display for any naval history collector, measuring (with the margins), about 8 1/2 by 4 3/4 inches.
Other items in this issue include: "Description of the Cumberland Coast" which includes a small illustration: "View of Mount Skiddow & the Neighbouring Fells..."; an article with an illustration of: "...the Roman Bridge in France called Pont St. Esprit..." and more.
Near the back is the "Historical Chronicle" which has the latest news reports of the day including a case of slander in Massachusetts.
Lacking are two other plates called for.
Complete in 48 pages, 5 1/2 by 8 3/4 inches with wide, untrimmed margins, full title/contents page featuring an engraving of St. John's Gate, great condition.