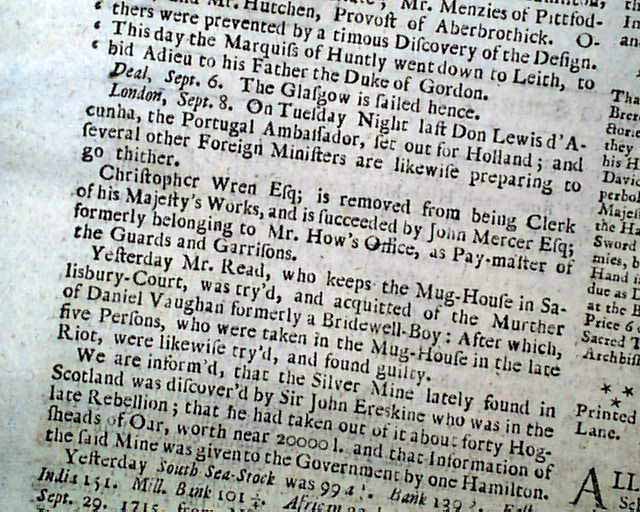 Near the top of the back page is a very significant item on the famous architect Sir Christopher Wren.
The report reads: "Christopher Wren, Esq., is removed from being Clerk of his Majesty's Works, and is succeeded by John Mercer Esq., formerly belonging to Mr. How's Office, as pay-master of the guards and garrison."
Christopher Wren is one of the most highly acclaimed English architects in history. He was accorded responsibility for rebuilding 52 churches in the City of London after the Great Fire in 1666, including what is regarded as his masterpiece, St. Paul's Cathedral, completed in 1710.
Other notable buildings by Wren include the Royal Naval College, Greenwich, and the south front of Hampton Court Palace. The Wren Building, the main building at the College of William and Mary, Virginia, is attributed to Wren.
Rarely do we have an opportunity to offer period reports concerning Christopher Wren.
A single sheet issue with two decorative engravings in the masthead, partial red tax stamp on page 2, measures 8 1/4 by 14 inches, nice condition.