Home > Back to Search Results > A first report on Lincoln's assassination...
Click image to enlarge 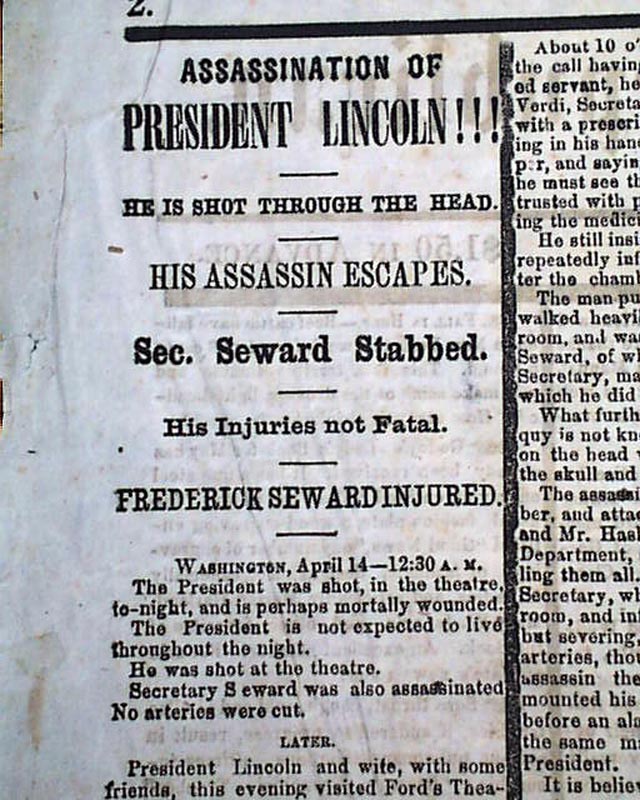 A first report on Lincoln's assassination...

Being a weekly newspaper this is the first report of the Lincoln assassination, and given it was printed 7 days after his death is includes much more information than typically found in an April 15 issue.
Page 2 has nice column heads including: "Assassination of PRESIDENT LINCOLN!!!" "He Is Shot Through The Head" "HIS ASSASSIN ESCAPES" "Sec. Seward Stabbed" "The Murderers Are Known!" "THE GREAT CRIME!" "THE PRESIDENT IS DEAD!" "Traces of the Assassin of President Lincoln!" "Supposed to be John Wilkes Booth!" "Andrew Johnson Sworn In".
The text is considerable, taking all of page 2, and begins: "The President was shot in the theatre to-night, and is perhaps mortally wounded. The President is not expected to live throughout the night..." with further details as new information was received.
Page 4 begins with an editorial headed: "The Great Crime" with the balance of the page filled with related reports including: "The Late President" "Our New President" "Important Letter from J. Wilkes Booth" "Richmond in Mourning" "Monuments to President Lincoln" "The Assassination" and more.
Additionally, page 8 has fine reporting as well with: "The Assassination" "$100,000 Reward" "The Latest About Booth" "Description of the Murderers" "The Remains of President Lincoln" "Jeff. Davis's Last Proclamation" "Mosby Surrenders!" "The Terms the Same as Those Granted Lee!" and more.
Eight pages, small folio size, never bound nor trimmed. All columns on all 8 pages are black-bordered, some mile wear at the central fold and margins, generally in good condition.