Home > Back to Search Results > Jefferson's offer to "restock" the Library of Congress...
Click image to enlarge 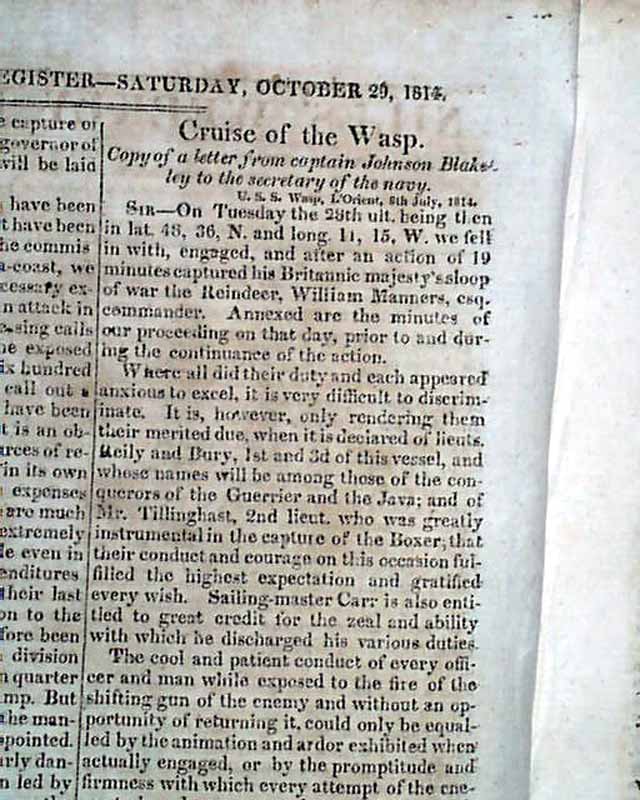 Jefferson's offer to "restock" the Library of Congress...

* Thomas Jefferson offers his library to the Library of Congress

Most of page 2 is taken up with an article headed: "Mr. Jefferson's Library - Mr. Jefferson's Offer of Congress of His Library" a letter signed in type: Th. Jefferson, datelined Monticello, Sept. 21, 1814. It begins: "I learn from the newspapers that the vandalism of our enemy has triumphed at Washington over science as well as the arts by the destruction of the public library with the noble edifice in which it was deposited..." followed by details concerning his offer to provide his personal & extensive library of books to the Library of Congress.
The Library of Congress was destroyed in August 1814, when invading British troops set fire to the Capitol building and the small library of 3,000 volumes. Within a month, former President Jefferson offered his personal library as a replacement.
Among the other reports including the War of 1812 are: "Cruise of the Wasp" "American Prizes" "Brown & Chauncey" "Events of the War" taking over 4 pages with war reports.
Sixteen pages, 6 by 9 3/4 inches, lite foxing, an archival mend on the back leaf, very good condition.