Home > Back to Search Results > Lincoln's "We have forgotten God" proclamation... Map of Puebla, Mexico...
Click image to enlarge 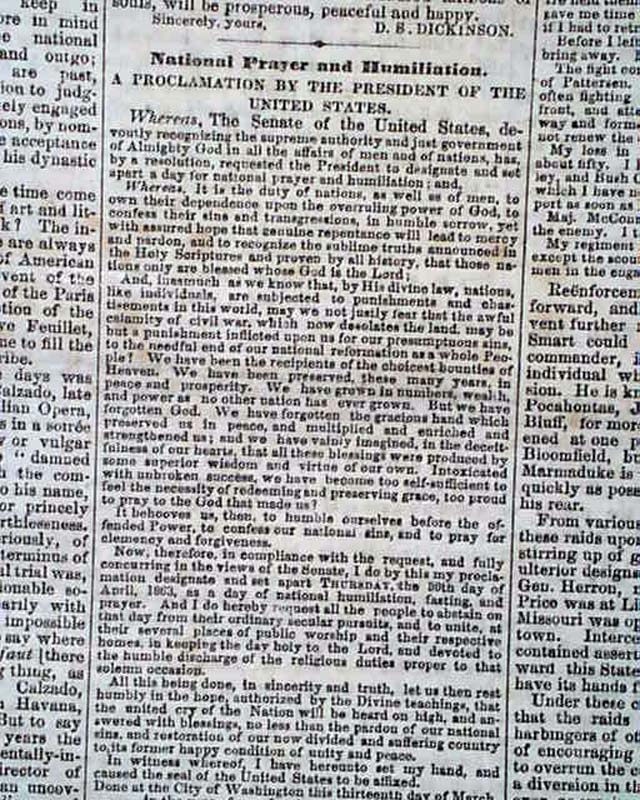 Lincoln's "We have forgotten God" proclamation... Map of Puebla, Mexico...


NEW YORK TRIBUNE, April 30, 1863
*  "We have forgotten God..."
*  Lincoln's Day of Fasting, Humiliation and Prayer
*  See the note below for significance
Page 3 has: "THE NATIONAL FAST, Proclamation by the President of the United States", which contains the full text for the National Day of Fasting, Humiliation, and Prayer.
A few portions include: "...Senate of the United States devoutly recognizing the supreme authority & just government of Almighty God in all the affairs of men...has...set apart a day for National prayer and humiliation...we have forgotten God...It behooves us, then, to humble ourselves before the offended Power, to confess our national sins, and to pray for clemency and forgiveness..." with much more.
It is dated March 30, 1863 & signed in type at its conclusion: ABRAHAM LINCOLN. See note below for significance.
Following Lincoln's proclamation are similar proclamations by the Governor of New York, the mayor of New York City, and the Mayor of Brooklyn, as well as an additional lengthy article in response to the proclamation.
Additionally, the front features a nice & very detailed map headed: "Map Of The City of Puebla And Its Environs" with a key as to the principal buildings, etc. The front page has related heads and reports on the Civil War, with: "From Mexico" "French Accounts of the Siege of Puebla" "The City Entered by the French Troops" "From New Orleans & Key West" "Banks Captures the Opelousas Railroad" "From Washington" "Payment Of Mustered Out Soldiers" "General Banks's Successful Advance" and more. More war content inside as well.
Eight pages with some light foxing. Uncut and untrimmed, in overall good condition.
Note: Multiple sites consider this proclamation to be a prelude to his historic Thanksgiving proclamation given six months later and as a precursor to what is now the National Day of Prayer (adopted July 4, 1953). On September 27, 2000, the Senate, in a response to growing internal tensions, took up a resolution to reaffirm Lincoln's March 30, 1863 proclamation. The resolution was not adopted.