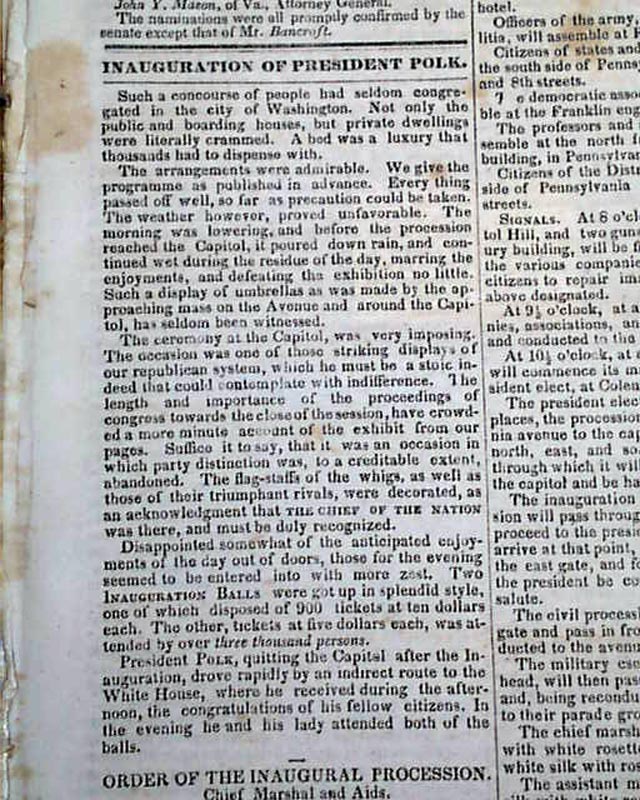 The front page begins with a report headed: "Inauguration of President Polk" noting in part: "...The arrangements were admirable...The ceremony at the Capitol was very imposing...President Polk, quitting the Capitol after the Inauguration, drove rapidly by an indirect route to the White House, where he received during the afternoon, the congratulations of his fellow citizens. In the evening he and his lady attended both of the balls...".
Also on the front page is: "Inaugural Address" which continues inside taking nearly 2 pages.
Also of note is a report from Congress: "Florida and Iowa" which reports: "The bill from the house of representatives for the admission of the states of Florida and Iowa into the union was taken up... The bill was finally passed by the following vote, and having obtained the president's signature becomes law:..". Florida formally joined the Union on March 3, 1845, Iowa not until the end of 1846 due to a boundary dispute issue.
There is also much reporting from Congress concerning the admission of Texas to the Union, which would become the 28th state on Dec. 29, 1845.
Eight pages, 8 1/2 x 12 inches, nice condition.