Home > Back to Search Results > Building a lighthouse on Cape Henry... Treasury Dept. document on the historic Funding Act of 1790...
Click image to enlarge 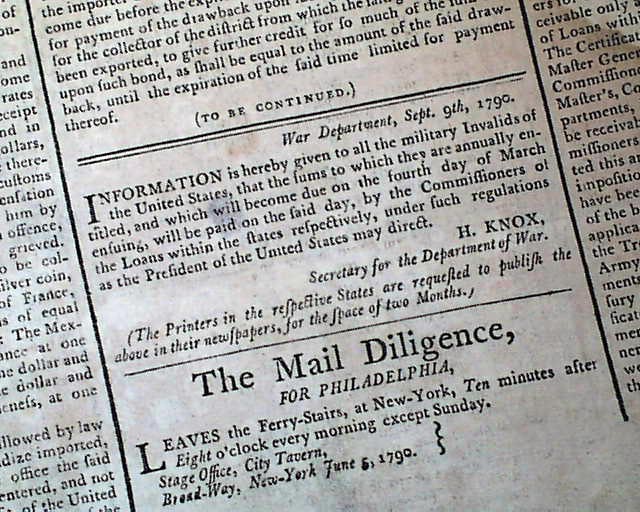 Building a lighthouse on Cape Henry... Treasury Dept. document on the historic Funding Act of 1790...

The front page has a short item signed: H. Knox, Secretary of War, concerning payments to wounded veterans of the Revolutionary War. The front page also has a notable item headed: "Treasury Department" concerning the historic Funding Act of 1790, whereby the new federal government assumed the debts of the individual states incurred during the Revolutionary War.
Page 3 has an: "Address to the King by Mons. de la Fayette..." with the reply of the king.
Also on pg. 3 is a very descriptive document from the "Treasury Department" for construction of a light house at Cape Henry, Virginia, with exacting details as to size, shape, how to be built, etc.. This is a very historic lighthouse, which was ultimately completed in 1792 and is still standing.
A page 3 report from Fredericksburg says: "The Hon. James Madison, jun. Richard B. Lee... and three other gentlemen ...are elected members of the House of Representatives of the United States, from their respective districts."
The back page is mostly taken up with the: "Celebration of the Anniversary of French Freedom", the first anniversary since the storming of the Bastille.
Four pages, various staining & foxing, otherwise good condition.