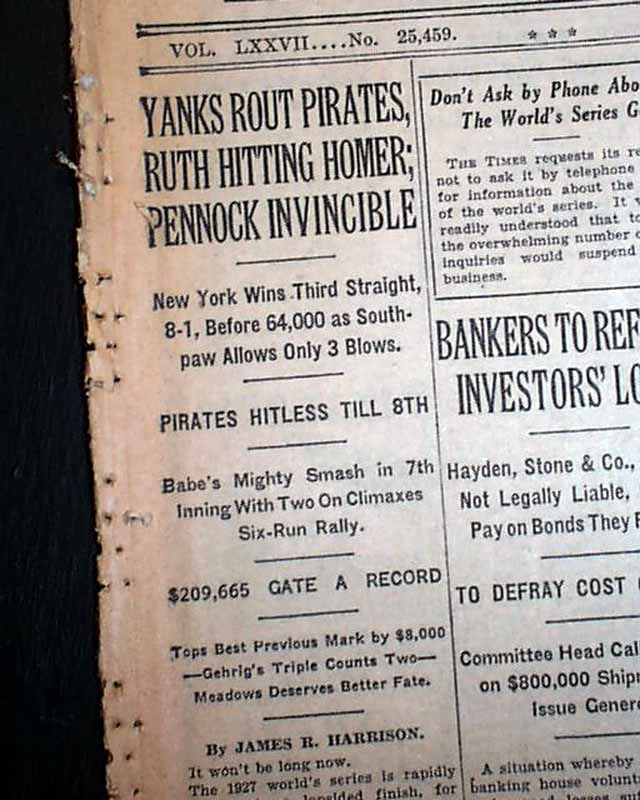 
THE NEW YORK TIMES, Oct. 8, 1927  The top of the first column of the front page reports the results of the 3rd game of a 4-game World Series, with: "Yanks Rout Pirates, Ruth Hitting Homer; Pennock Invincible" and several subheads including: "New York Wins Third Straight, 8-1..." "Babe's Mighty Smash in 7th Inning With Two On Climaxes Six-Run Rally." and more. The article begins: "It won't be long now. The 1927 world's series is rapidly tottering to a lopsided finish...".
Coverage carries over to two of the sports pages with a banner headline: "Yankees Trounce Pirates, 801, Before 64,000 for Third World's Series Victory" with various text, an illustration of Herb Pennock, and a nice photo of Babe Ruth with his wife and daughter. Loads of text.
Terrific to have this historic report in this revered New York newspaper.
Complete in 36 pages, library stamp at the top, tiny pin holes at the blank spine where once bound, great condition.