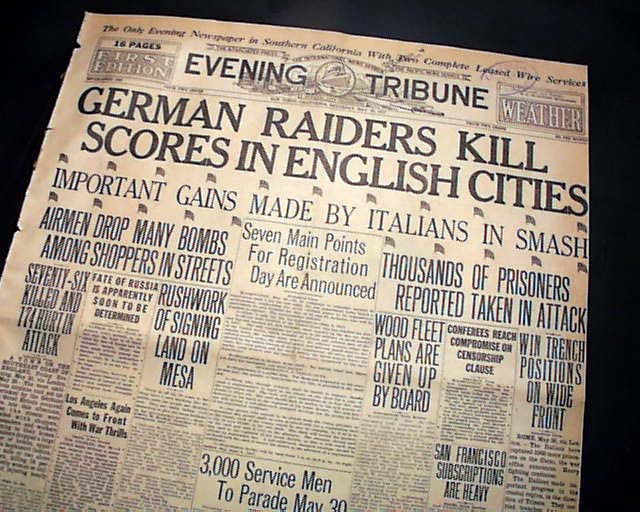 The front page has a nice banner headline: "GERMAN RAIDERS KILL SCORES IN ENGLISH CITIES" with subhead. (see) Nice for display. A small library label affects this headline. (see) Surprisingly this issue is in good condition being from the "wood pulp" era. Very hard to find issues that are not totally fragile from this era in paper. Rare as such.
Complete with 16 pages, small library stamp within the masthead, generally nice.

wikipedia notes: Kagohl 3 received the first Gotha G.IV aircraft in March, and on 25 May, the squadron commenced Operation Turkenkreuz, sending 23 Gothas to bomb London. Two were forced to turn back over the North Sea due to mechanical difficulties and cloud over London caused the remaining bombers to divert to secondary targets at the Channel port of Folkestone and the nearby Shorncliffe Army Camp. The raid resulted in 95 deaths and 195 injuries, mostly in Folkestone. In Shorncliffe, 18 soldiers (16 Canadian and two British) were killed and 90 were wounded. Nine Royal Naval Air Service (RNAS) Sopwith Pups engaged the bombers near the Belgian coast as they returned, shooting one down.