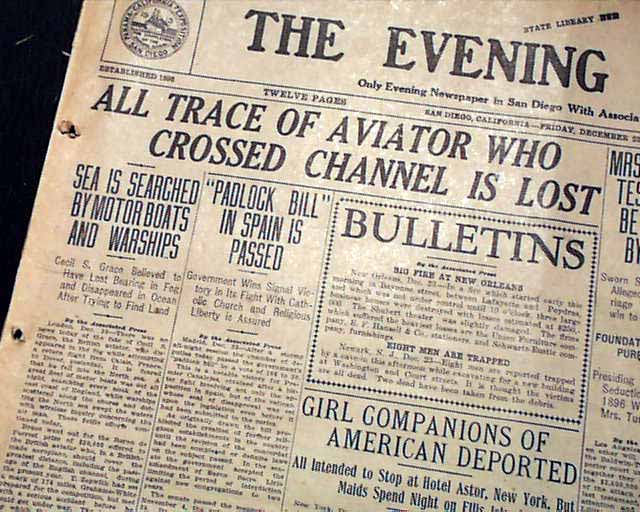 The top of the front page has a four column headline "AVIATOR FLIES OVER ALPS AND IS BADLY INJURED ON LANDING" with subheads. (see) Surprisingly this issue is in good condition being from the "wood pulp" era. Very hard to find issues that are not totally fragile from this era in paper.
Complete with 10 pages, small library stamps within the masthead, a few small binding holes along the spine, generally very nice.

wikipedia notes: After this successful series, Chávez decided to undertake the first air crossing of the Alps. This attempt was made in response to a prize of $20,000 offered by the aero club of Italy for the first aviator to make the trip alive. After several delays due to bad weather, he took off from Ried-Brig, Switzerland on September 23, 1910, and made his way through the Simplon Pass. Before departing he said, "Whatever happens, I shall be found on the other side of the Alps". Fifty-one minutes later he arrived at his destination, the city of Domodossola, Italy, but his plane crashed upon landing. It is believed that the airplane had been damaged previously and inadequately repaired, which caused the aircraft to break under the heavy winds of the mountains. Heavily injured but conscious, Chávez was taken to San Biaggio Hospital of Domodossola, where he was officially declared winner of the competition and received telegrams from all over the world congratulating him for his achievement. He also received the visit of the president of the Aero Club of Italy and gave one last interview to his friend the journalist Luigi Barzini, telling all the details of his flight. He died four days later of massive blood loss. His last words were, "Higher. Always higher." according to the testimony of his friend and fellow aviator Juan Bielovucic.