Home > Back to Search Results > On the death of rock icon Jim Morrison, in the Village Voice...
Click image to enlarge 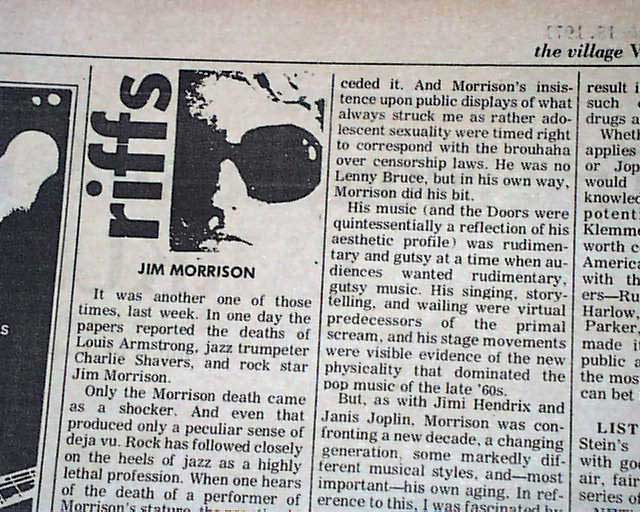 On the death of rock icon Jim Morrison, in the Village Voice...

Near the middle of the issue (page 36) is a report on the death of the rock legend "Jim Morrison".
The report begins: "It was another one of those times, last week. In one day the papers reported the deaths of Louis Armstrong, jazz trumpeter Charlie Shavers, and rock star Jim Morrison. Only the Morrison death came as a shocker..." with much more. Great to have this report in this newspaper.
As most might be aware "The Village Voice" was an American news and culture paper, known for being the country's first alternative newsweekly. It introduced free-form, high-spirited, and passionate journalism into the public discourse a tradition it maintained throughout its 60+ year history.
Complete in 80 pages, tabloid-size, never bound nor trimmed, good condition.