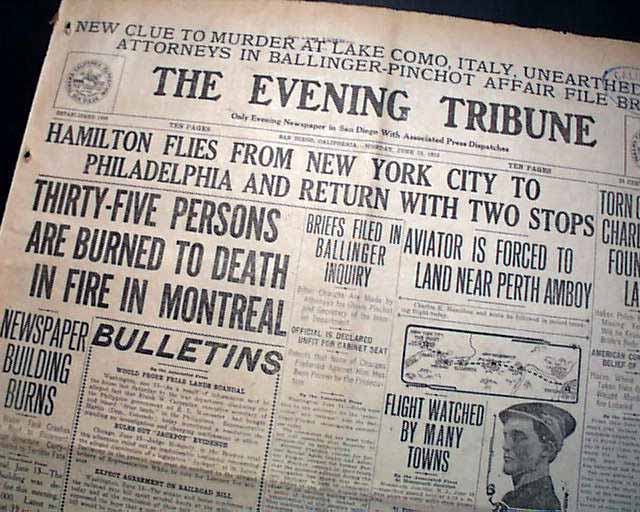 The front page has a six column headline: "HAMILTON FLIES FROM NEW YORK CITY TO PHILADELPHIA AND RETURN WITH TWO STOPS" with subheads, small photo of Hamilton and related map. (see) Surprisingly this issue is in good condition being from the "wood pulp" era. Very hard to find issues that are not totally fragile from this era in paper. Rare as such.
Complete with 10 pages, small library stamp within the masthead, some small binding holes along the spine, generally nice.

wikipedia notes: On June 13, 1910, Hamilton won a prize of $10,000, sponsored by The New York Times and the Philadelphia Public Ledger, for being the first to fly from New York City to Philadelphia and back, the first flight between two major US cities. He departed from Governors Island in New York harbor at 7:30 am and reached Philadelphia at 9:26 am. With a stopover in Philadelphia, the round trip took a little over 11 hours, at an average speed of nearly 51 miles per hour (82 km/h). He received a hero's welcome in his hometown of New Britain.