Home > Back to Search Results > Arriving for the first inauguration... Mendoza, the famed Jewish boxer...
Click image to enlarge 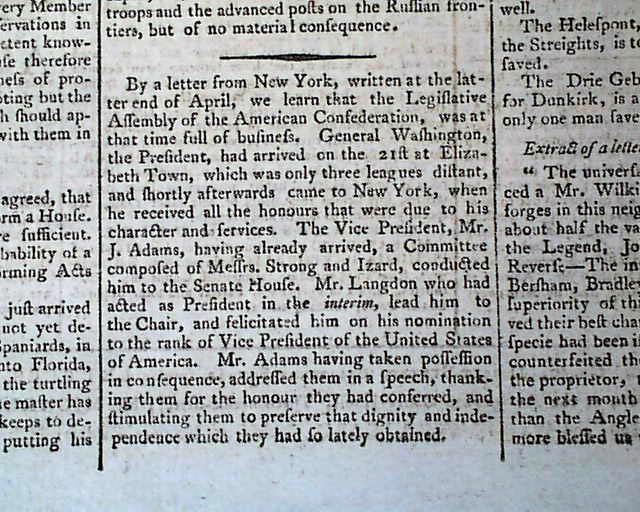 Arriving for the first inauguration... Mendoza, the famed Jewish boxer...


THE DIARY OR WOODFALL'S REGISTER, London, June 13, 1789  Page 2 has a nice report concerning events just prior to Washington's inauguration: "...letter from New York...the legislative Assembly of the American Confederation was at that time full of business. General Washington, the President, had arrived on the 21st at Elizabeth Town...came to New York, when he received all the honours that were due to his character & services. The Vice President, Mr. J. Adams, having already arrived..." with more.
Also a report headed: "Boxing" mentioned Mendoza receiving a challenge, and mention of Hunphreys as well. Mendoza is the famed Jewish boxer Daniel Mendoza. He was a famous British boxer who transformed the English stereotype of a Jew from a weak, defenseless person into someone deserving of respect. He is said to have been the first Jew to talk to the King, George III.
Four pages, never-trimmed margins, red tax stamp on the ftpg., great condition.