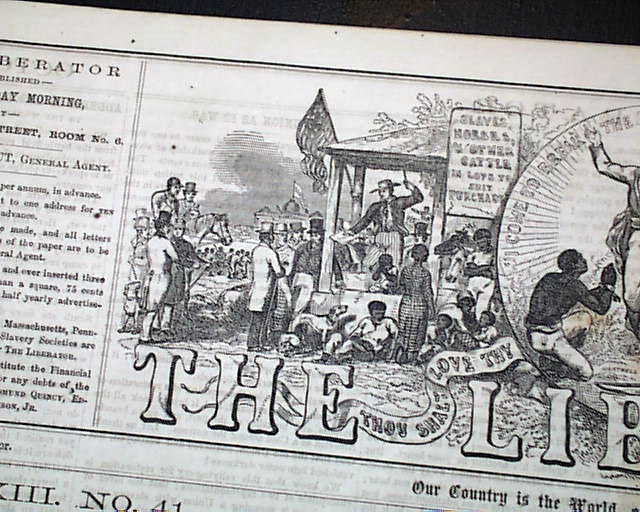 A very famous anti-slavery newspaper published by the noted emancipator William Lloyd Garrison. The ornate engraving in the masthead features three scenes: a slave auction, an image of Jesus breaking the bonds of the oppressors, and a slave family about to depart for their journey to emancipation.
A notable issue as page 3 has: "A National Thanksgiving, by the President of the United States, A Proclamation" signed in type: Abraham Lincoln.
This was the creation of the very first national Thanksgiving Day, still celebrated to this day. Although almost every President since George Washington has issued a proclamation for a "day of thanksgiving", typically celebrated in November but at other times of the year as well, it was Abraham Lincoln who formalized Thanksgiving Day to be celebrated the fourth Thursday of every year and made it a national holiday.
Also of interest is a nearly full column: "Address of Mrs. Elizabeth C. Stanton To the Women Of the Republic" signed by her: Elizabeth Cady Stanton.
There is a wealth of other good anti-slavery content in this issue but it pales in comparison to the Lincoln Proclamation.
Four pages, archival strengthening at the blank spine, very nice, clean condition.