Home > Back to Search Results > Madison proposes Amendments to the Constitution... Early edition of the Bill of Rights...
Click image to enlarge 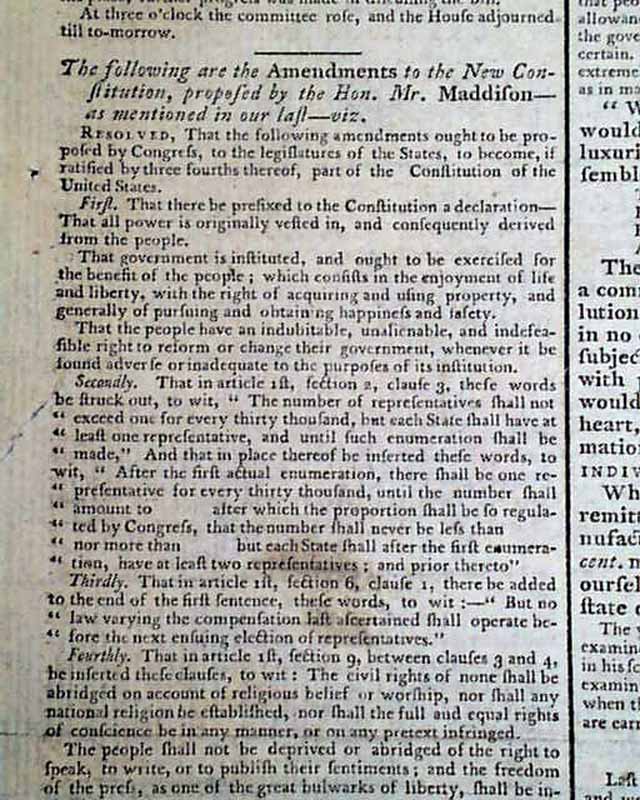 Madison proposes Amendments to the Constitution... Early edition of the Bill of Rights...

An exceedingly significant issue which has, on page 3, a preliminary draft of the Bill of Rights described as  "...the Amendments to the New Constitution, proposed by the Hon. Mr. Maddison [sic]...".
Prefacing the draft of the nine amendments is a resolve that reads: "That the following amendment ought to be proposed to Congress, to the legislatures of the States, to become, if ratified by three-fourths thereof, part of the Constitution of the United States."  Hereafter is the text of each of nine amendments proposed by Madison.
Madison proposed these Amendments on June 8, 1789, during the First Congress, just a few days before this issue was published. Ultimately there were, in September, twelve amendments sent to the states, ten of which were ratified and became known as the Bill of Rights. The text of these nine proposed amendments agrees verbatim with the text as found at constitution.org.
Also included in this issue, on pg. 2, is a "Sketch of Proceedings of Congress In the House of Representatives of the United States", for the dates of June 10 thru June 12, which provides a chronological perspective to the historic content in this issue.
Great to have this significant document in this title from what was the nation's capital at the time, and likewise was considered the main news source for any activity conducted by the federal government. In fact, when the government was removed to Philadelphia, this newspaper relocated there as well.
This was just the second printed appearance of the first draft of the Bill of Rights. Madison's proposals were first printed in the N.Y. Daily Advertiser on June 12, followed the next day by this June 13 issue of the Gazette of the United States, more than 3 months before they were finalized & approved by the Congress.
This is essentially the earliest version of any form of the Bill of Rights obtainable as issues of the Daily Advertiser from this period are exceedingly rare.
Four pages, never bound nor trimmed with wide margins, in very nice condition.

Note: Swann Auction Galleries sold this same title & date for $31,200 in April, 2012, and the highly respected Bill Reese Auctions cataloged another of this title & date for $30,000 in December, 2014. Since then, values of such historic/rare issues have risen significantly. See AMERICAN TREASURES: DOCUMENTING THE NATIONS FOUNDING for additional information regarding this issue along with a handful of others (make note of the third bullet point).