Home > Back to Search Results > Hanging of a minister...
Click image to enlarge 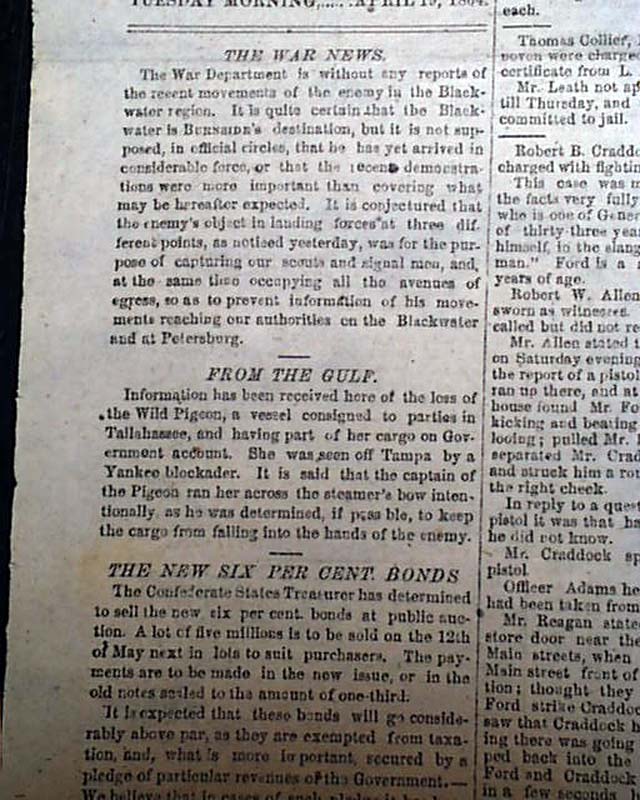 Hanging of a minister...

The front page includes: "From the Gulf" "The War News" "The New Six Per Cent Bonds" "Important Arrest of an Alleged Spy" "An Iron-Clad runs the Blockade" and more, including a brief report that: "The capture of Fort Pillow seems to be confirmed..." and also: "James Findlay, chaplain, 53 years old, was hung at Tunnel Hill to-day for encouraging mutiny & carrying on a secret correspondence with the enemy...".
The back page features a very lengthy editorial beginning: "One point of contrast between these Confederates States & the invading Power has been highly gratifying to ourselves & has given us as favourable a reputation with the rest of the world as the gallantry of our soldiers in the field. It is the contract between the slavish abandonment by our enemies...". Also on the bkpg: "White Slavery In The North...The Poor Whites In the North--How They Live..." and more.
A single sheet issue with a full banner masthead, very nice condition.