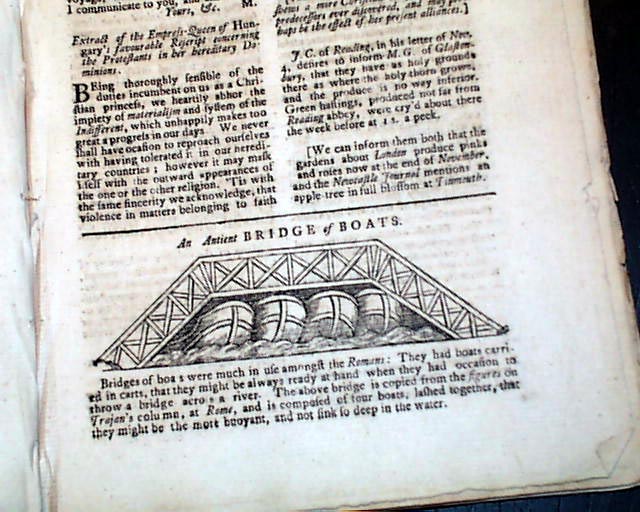 Item # 681445 THE GENTLEMAN'S MAGAZINE, London, November, 1753  Near the back is a small & inconspicuous item reading: "At the anniversary meeting of the Royal Society the prize medal of gold was voted to Ben Franklyn, Esq. of Maryland, for his electrical discoveries."
Note that not only did they spell his name wrong but they have his home colony wrong.
At the back is the "Historical Chronicle" section with the latest news of the day & which includes a nearly full column under the heading: "America" with reports from Boston and Virginia.
Included is one of the plates called for in addition to two plates of coats-of-arms for Baronets. There is also a half print print of the "Proboscis of an Amphibious Animal" with a related article.
Complete in 48 pages, full title/contents page featuring an engraving of St. John's Gate, 5 by 8 1/4 inches with wide, never-trimmed margins, very nice condition.