Home > Back to Search Results > 1865 State of the Union Address on reconstruction....
Click image to enlarge 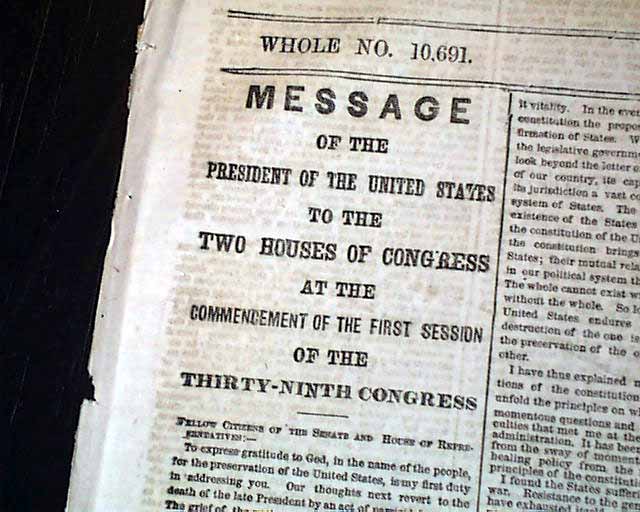 1865 State of the Union Address on reconstruction....

The top of the 1st column of the front page has a one column heading: "MESSAGE of the President Of The United States To The Two Houses Of Congress...." Text of the address takes up 5 columns, all on the front page and is signed in type: Andrew Johnson. It includes, in part:

"To express gratitude to God in the name of the people for the preservation of the United States is my first duty in addressing you. Our thoughts next revert to the death of the late President by an act of parricidal treason. The grief of the nation is still fresh. It finds some solace in the consideration that he lived to enjoy the highest proof of its confidence by entering on the renewed term of the Chief Magistracy to which he had been elected; that he brought the civil war substantially to a close; that his loss was deplored in all parts of the Union, and that foreign nations have rendered justice to his memory. His removal cast upon me a heavier weight of cares than ever devolved upon any one of his predecessors. To fulfill my trust I need the support and confidence of all who are associated with me in the various departments of Government and the support and confidence of the people. There is but one way in which I can hope to gain their necessary aid. It is to state with frankness the principles which guide my conduct, and their application to the present state of affairs..." ...  "Where, in past history, does a parallel exist to the public happiness which is within the reach of the people of the United States? Where in any part of the globe can institutions be found so suited to their habits or so entitled to their love as their own free Constitution? Every one of them, then, in whatever part of the land he has his home, must wish its perpetuity. Who of them will not now acknowledge, in the words of Washington, that "every step by which the people of the United States have advanced to the character of an independent nation seems to have been distinguished by some token of providential agency"? Who will not join with me in the prayer that the Invisible Hand which has led us through the clouds that gloomed around our path will so guide us onward to a perfect restoration of fraternal affection that we of this day may be able to transmit our great inheritance of State governments in all their rights, of the General Government in its whole constitutional vigor, to our posterity, and they to theirs through countless generations?"