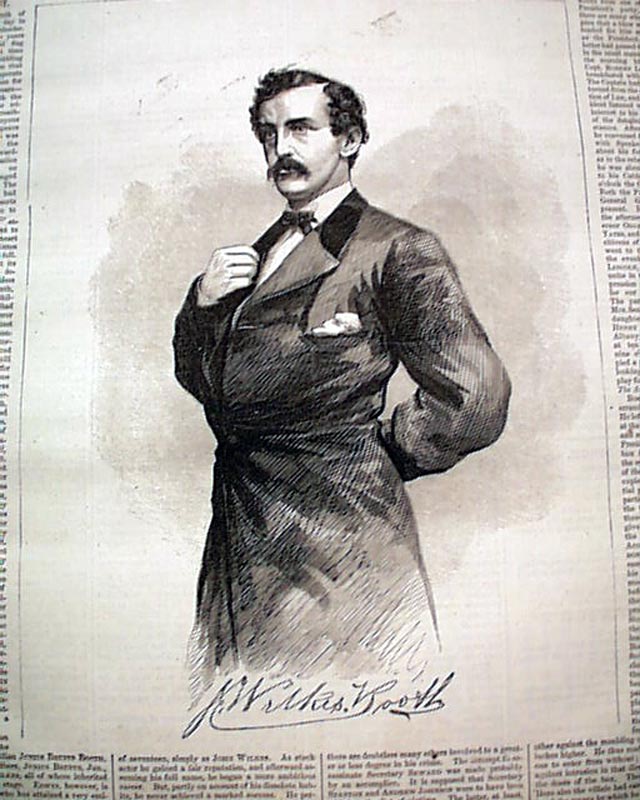 * Famous Abraham Lincoln assassination issue
* The same issue (title and date) found in the time capsule under the (former) statue of Robert E. Lee on Dec. 28, 2021

The front page has a large and dramatic illustration of "J. Wilkes Booth" plus a lengthy article headed: 'The Murder Of The President' making this a nice display issue.
Inside articles are headed: "Abraham Lincoln" "President Johnson" "Mr. Seward" "Great Pan Is Dead" and "The Folly of Crime". A small illustration captioned: "Plan of the Box Occupied by President Lincoln at Ford's Theatre, April 14, 1865" is present also.
Also inside is a full page with two prints: "The Assassination Of President Lincoln at Ford's Theatre on the Night of April 14, 1865" showing Booth shooting Lincoln in the head; and the other: "The Assassination of President Lincoln at Ford's Theatre - After the Act" showing Booth leaping to the stage in making his escape.
The very dramatic doublepage centerfold by Thomas Nast shows Liberty weeping on Lincoln's coffin.
A full page engraving by Thomas Nast shows: "The Eve of War" and "The Dawn of Peace" with a related article.
Another page features a 1/3 illustration: "The Siege of Mobile - Wreck of the 'Osage' and the Monitor 'Milwaukee'", 1/3 page illustration: "Landing of the National Forces at the Mouth of Fish River, Below Mobile, March 23, 24, and 28th, 1865"; 1/6 page illustration: "Destruction of the Tin-Clad No. 48, April 1, 1865" and 1/6 page illustration: "Mushroom Anchor Torpedoes".
Also included is a half-page: "Sherman's Army - the Third Division of the Fourteenth Corps Crossing Juniper Creek, March 9, 1865".
Sixteen pages, minor insect damage at the very bottom of the spine does not affect any of the images or text, a printing crease in the top portion of the front page, otherwise very nice condition.